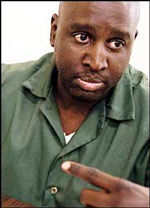 Darius McCollum, the minor cult figure among train buffs and subway enthusiasts, was arrested again this morning after being caught in a restricted area at Columbus Circle . McCollum is such a well known figure, that police recognized him on sight boarding an uptown 1 train at Times Square wearing a blue transit worker-like uniform and gloves that bore a NYC Transit patch. They followed him when got off the train at Columbus Circle and arrested him when he bypassed a barricade at the station.

This probably means that the hardest non-working man in NYC Transit could be headed back to Sing Sing. He pleaded guilty to attempting to steal a locomotive when caught in a LIRR railyard in 2005, but was released in 2006. He was re-imprisoned for violating his parole when he was caught possessing railroad property.

Defenders of McCollum's odd behavior--although he's been arrested many times, he's never hurt anyone--claim that the 43-year-old has Asperger's Syndrome, a form of autism that reveals itself as an extreme preoccupation with a certain subject. A play titled "Boy Steals Train", was eventually written and performed to acclaim in 2003. A thorough account of Darius McCollum and his overabundant love of trains can be found in a 2002 Harper's Magazine profile.

#arrest
#aspberger's
#darius mccollum
#lirr
#MTA
#nyc transit
Do you know the scoop? Comment below or Send us a Tip