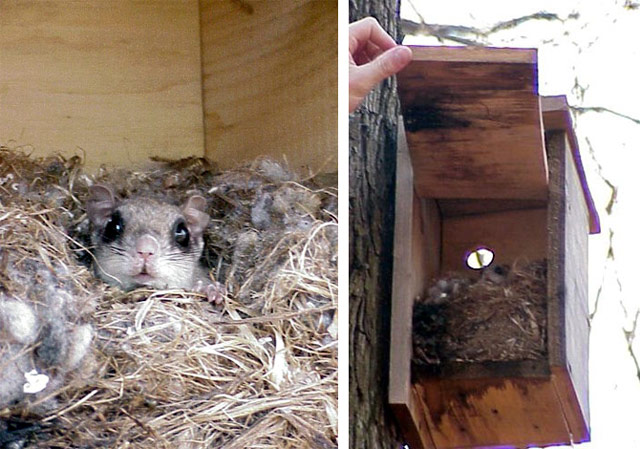 It's a walk-up, but the price is right. City squirrels are enjoying the goodwill of concerned citizens and the Parks Dept., who cooperated to install squirrel houses in City Hall Park. Mark Garvin had five of the boxes, which measure about a foot around, built with soft pine for several hundred dollars a piece--city real estate insanity extends to the trees!

Garvin initially became concerned about the plight of the squirrels after the September 11 attacks, when downtown was blanketed with possible toxic dust. The biologist by day (and squirrel houser in his free time) said he saw squirrels dying in the days following the attacks for lack of shelter.

The Parks Department is not unfamiliar with building squirrel houses. The above pictures are of a home installed in Forest Hills, Queens; eventually, a flying squirrel took it over. (We didn't even know that NYC had flying squirrels!) The Parks Dept. considers this a continuation of a program to house naturally beneficial animals, like owls, bats, wood ducks, tree swallows, and purple martins.

City Parks Ranger Capt. Richard Simon told Newsday squirrels are an integral part of the City's parks, "Old people like to feed them and the tourists like to see them. They're just very friendly, and they're cute." It's hard not to agree.