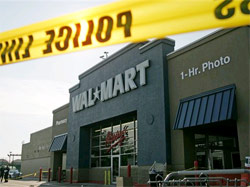 An autopsy into the Black Friday death of an employee at Long Island Wal-Mart revealed that he was trampled to death. Newsday reports that Nassau County Police Commissioner Lawrence Mulvey said the finding showed Jdimyati Damour of Queens died of "positional asphyxiation."

An unruly, restless crowd of customers broke down the Valley Stream's store's doors and knocked the 34-year-old down in a stampede. Two people injured in the stampede have filed a $2 million notice of claim against Nassau County and the police (but not Wal-Mart?), citing, "injuries to their neck and back, including but not limited to injuries of emotional harm."

Yesterday, City Councilman James Gennaro introduced a bill to require retailers to provide adequate security for doorbusters sales. According to NY1, he said, "These early morning, middle of the night crushes of shoppers are essentially street activities and they should be regulated. And there should be requirements put forth, which fortunately some retailers already observe and they have security personnel and they have crowd control. But some don't and we have to make sure that in every case that is the case."

#asphyxiation
#black friday death
#Black Friday shopping
#doorbusters sale
#trampled to death
#valley stream
#wal-Mart
Do you know the scoop? Comment below or Send us a Tip
A new Gothamist is coming! We’ve moved comments over to our beta site. Click here to join the conversation and get a preview of our new website.