The family of the 23-year-old Australian woman killed while biking on Central Park West are devastated. Madison Jane Lyden's father told the Post, "Our girl was on the trip of a lifetime, and she’d only spoken to me I think the previous day… and said, ‘Dad, can you believe your little girl is in New York City?’"

Lyden had been traveling north in the Central Park West bike lane on Friday afternoon when, just before 4:45 p.m., a livery cab moved into the bike lane from a parked position and Lyden swerved into traffic to avoid it around 66th Street, according to police. A private sanitation truck driver, also heading north, then struck Lyden.

Lyden was pronounced dead at Roosevelt Hospital. The NYPD charged the truck driver, Felipe Chairez, 44, who was arrested for DWI and operating a commercial vehicle while under the influence of alcohol (it was between 0.04 and 0.06%). Beer cans were reportedly in the truck at the time. 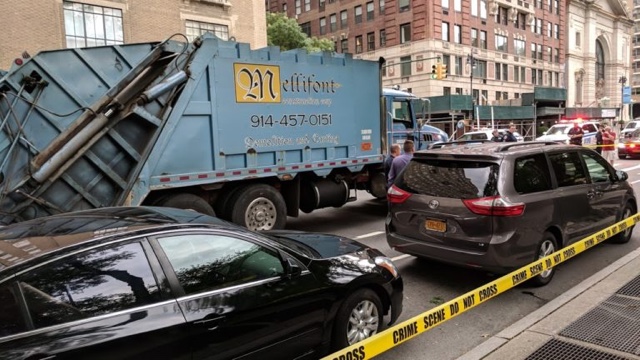 (Courtesy of West Side Rag)

"Madison was a beautiful, beautiful daughter. She was loyal, loving," the victim's father, Andrew Lyden, added. "For her to be taken from us in such a horrific way is gut-wrenching. Words can’t describe how heartbreaking this is."

A lawyer for Chairez claimed his client's lunch would have counteracted any possible effects of alcohol, "If he had a chicken salad sandwich, the alcohol may have been absorbed by the lunch he had."

The livery driver has not been charged yet; the NYPD says the collision is still under investigation.

Mayor de Blasio, who happened to be in the neighborhood for another event, went to the scene. He said, "Of course there has to be a full investigation, but this is an example from my point of view of the danger of reckless driving."

"Madison Jane Lyden is dead because her bike lane was blocked," Transportation Alternatives Executive Director Paul Steely White said in a statement. "It’s tragic, yes, but all the more unconscionable because this was a crash waiting to happen. Every day in this city, bike lanes meant to protect people on bikes are used as drop-off lanes, parking lanes, and idling lanes for lazy and entitled drivers. As a city we should be ashamed, because this death could have been prevented. More and more people are traveling by bike in our city, and they need safe, protected space. And while we have more protected lane-miles today than ever before, this preventable death underscores the need for every major street in New York City to have a safe, protected space to travel by bike."

#bike lane
#central park west
#madison jane lyden
#vision zero
Do you know the scoop? Comment below or Send us a Tip