Aurora Borealis Might Drop In To Say Hello On Friday

A 2007 Aurora Borealis in Greenland. (Getty)

Tomorrow night the Aurora Borealis will be happening close enough to us that some are predicting residents of certain U.S. states will be able to see it. Northern states (including New York) will have the best chance, but according to Accuweather, "The dazzling light display could reach as far south as Maryland in the east and down to Kansas farther west." 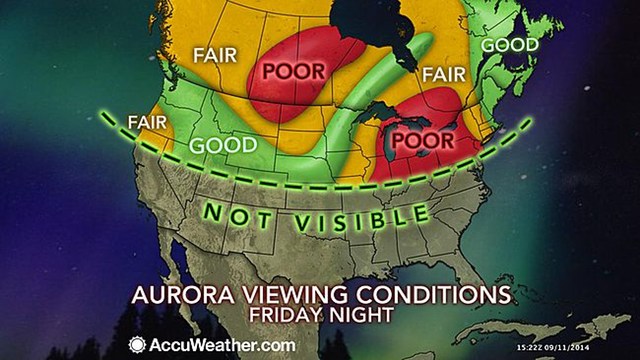 Their astronomer Hunter Outten says "the flare is ranked as an X-class, or the highest class for a solar flare. Along with the brilliant light display that may be visible to some in the northern part of the country, a flare of this magnitude could also have adverse effects on GPS, radio frequencies and cell phone and satellite reception as well." Outten says, "There will be a pretty good chance to see the northern lights," and the best viewing time would be around midnight (that's Friday going into Saturday). He also notes that DSLR camera will pick up the action better than the human eye.

Cloud coverage, along with light from this week's Supermoon and the fact that we never get to see this cool space shit, may dull views. Also be on the lookout for UFOs, which enjoy flying through the Northern Lights:

#aurora borealis
Do you know the scoop? Comment below or Send us a Tip
A new Gothamist is coming! We’ve moved comments over to our beta site. Click here to join the conversation and get a preview of our new website.