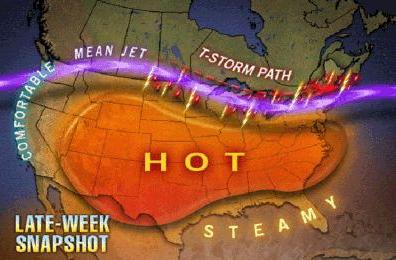 The lead sentence on this morning's National Weather Service forecast:

Showers likely and possibly a thunderstorm before 4pm, then a chance of showers and thunderstorms after 4pm.

is so precisely worded as to make Gothamist wish we had taken a class on deconstructing literature rather than all those dumb meteorology courses. From what is stacking up to be a busy weather day we parse the NWS as saying that widespread, lighter showers will be the dominant form of rain before 4pm. After 4 o'clock thunderstorms are more likely than widespread showers. We say that because there's a warm front creeping up from the south this morning to be followed by a weak cold front arriving from the Great Lakes later today.

The end result of those fronts is a lot of clouds and a really good chance of rain. There's a slight chance that the late-afternoon thunderstorms could be severe in a high winds and hail sort of way. Today's high will be a swampy 81 degrees.

The cold front will be pushed back northwards overnight. While Friday didn't turn out to be the hottest day of the year, tomorrow might. Expect mostly sunny skies with a humid high in the low 90s. Wednesday won't be quite as hot but the humidity will still be here, and there will be a chance of showers. Thursday is shaping up to be the nicest day of the week, then we head into a showery, humid weekend.