Keith Raniere, purported "Vanguard" of the alleged sex cult Nxivm, actively helped architect the ceremony in which select members had his initials seared into their skin, according to audio played at his trial last week and published by the NY Times.

Raniere has been accused of sex trafficking, forced labor conspiracy, child pornography stemming from his alleged abuse of minors, racketeering, and other charges related to his role as alleged captain of a "sexual pyramid scheme" based in upstate New York.

In the audio, Raniere and Allison Mack, a top Nxivm lieutenant who pleaded guilty to racketeering conspiracy in April, walk outside as they discuss the particulars of the recipient's body position during the branding. She should probably be naked, Raniere proposes, with "legs spread straight, like feet being held to the side of the table, hands probably above the head, being held almost like tied down; sacrificial, whatever." The pair toy with possible ways to inject meaning into a brutal ritual by which "masters" inducted "slaves" into Nxivm's secret society, D.O.S. Maybe the person performing the brand speaks a specific line with each stroke of the cauterizing pen, Raniere mused, and then the "slave" repeats it back to them; certainly, the "slave" should ask to be branded, "so it doesn't seem like they're being coerced," Raniere adds.

"Also, of course, videoing it, videoing it from different angles gives collateral," he then notes, referring to the blackmail material (nude photos, incriminating letters) masters allegedly commanded slaves to provide as assurances of their loyalty to the group. "It probably should be a more vulnerable position," he explains.

The branding ritual has become a focal point of the controversy surrounding Nxivm, with former D.O.S. members attesting to the incredible pain and emotional damage inflicted on them during the ceremony. According to the Times, when reports about the organization's inner workings first started to leak out, Raniere sent the top-line "masters" a statement on the allegations. Emphasizing that the leaders had hired "highly qualified individuals" to conduct an independent investigation of Nxivm, and that they found no evidence of wrongdoing, Raniere added:

I feel it is important to clarify the sorority is not part of NXIVM and that I am not associated with the group. I firmly support one's right to freedom of expression, so what the sorority or any other social group chooses to do is not our business so long as there is no abuse. Our experts, a forensic psychiatrist of international repute, psychologists and ex-law enforcement, say members of the sorority are thriving, healthy, happy, better off, and haven't been coerced. Furthermore, the sorority is proud of what they created and want to share their story. [I] am confident they will be addressing you very soon.

The audio also featured Raniere explaining the brand as a signal of a member's total devotion to their master, which ultimately would have been him: "Pain is how we know how much we love," he tells Mack. "We know the depth of our love through pain, there is no other way in the human condition," he says. "If they feel the pain, think of that love. And that the love is greater than the pain, even. That the pain is giving you a measure of the love and that your love is even further than that. So although my body may be burned or tortured or whatever, my love is stronger, and it is the love of saints, it is the love of the purest beings that walk the earth and that are able to hold love even above life itself. You guys figure it out," he concluded, referring to Mack and the other top-line masters.

One of those former masters, Lauren Salzman (who has also pleaded guilty), told a different story in her testimony. She recalled that Raniere, faced with damning reports and mounting scrutiny, attempted to spin the brand's design—which clearly resembles a K and an R (or an A and an M, depending on the angle)—saying it had been inspired by the Greek alphabet, the seven chakras, and the four elements. Another round of audio played at trial, however, features Raniere calling the brand a "monogram" of his initials. 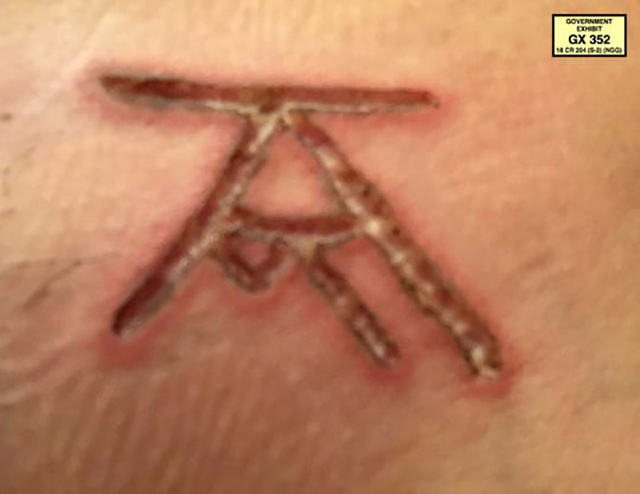 Although Mack has identified herself as the originator of the branding idea—she reportedly envisioned it as a "rite of passage," and a sign of "badass" sisterhood—the recordings suggest Raniere played an active role in its conceptualization, and that he seemed to view it as a means not only of exerting control over recruits, but a declaration of their absolute submission to him.

Throughout the trial, former members have testified to other forms of abuse to which Raniere reportedly subjected "slaves." They were allegedly beaten, closely and constantly monitored, and forced onto tightly restrictive diets. Sometimes Raniere threw disobedient "slaves" in a basement dungeon, Salzman said. Salzman has also admitted to holding a woman against her will for two years, under threat of deportation and on Raniere's orders. That woman took the witness stand on Thursday, reportedly telling the court that Nxivm's self-appointed "Grand Master" spent an extended period of time grooming her for sex on her 18th birthday, before instigating a sexual relationship with her younger (i.e. underage) sister instead.

If found guilty, Raniere faces a maximum sentence of life in prison.

#allison mack
#dos
#keith raniere
#keith raniere trial
#lauren salzman
#nxivm
Do you know the scoop? Comment below or Send us a Tip