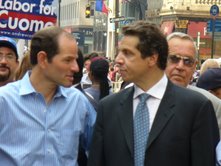 Whoa: Attorney General Andrew Cuomo released a report investigating allegations that Senate Majority Leader Joseph Bruno misused state aircraft, using it to travel to political fund-raisers, as well as Bruno's subsequent allegations that Governor Spitzer misused the state resources to spy on him. The report clears Bruno of wrongdoing, noting that the Republican was conducting state business and could justify using state aircraft.

But the report says, "The governor's office planned to obtain information concerning Senator Bruno's use of state aircraft for the purpose of giving this information to the media," and that some Spitzer appointees, like the acting superintendent of the state police and communications director Darren Dopp, could face disciplinary action. The CityRoom calls this a "devastating assessment and serious blow to Governor Spitzer." No kidding!

You can read the 57-page report here (PDF) - the most interesting part is on page 4, where the report says Spitzer's office had been planning to give media information about Bruno's state aircraft use since May. So the Post was right?

And while Bruno might be gloating, the Attorney General had a rebuke for him. Though Bruno was technically doing state business on days he use state helicopters to fly to NYC, the Attorney General notes that the state business only took up a "small part" of each day and that the policy of using state aircraft "is overly permissive and porous and allows for an abuse of taxpayer funds."