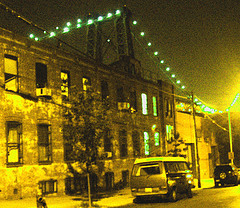 Today, we received a tip about recent attacks on women in Williamsburg.

so Friday night at about 1:30am i got attacked right out front of my apt building as i was trying to get in the door. i fought a good fight but the asshole got everything... id, cc cards, cash, phone, and a couple of kicks to my face. bruises and cuts aside... be careful in your own neighborhoods. he literally came out of nowhere. i live on south 4th between wythe and kent in williamsburg. the cops said that most likely hes a repeat offender, so if anyone hears of ANYTHING in williamsburg, let me know. Because the guy beat me up the cops are going to leave this as an open investigation. There are supposedly security cameras on the outside of my building, so hopefuly they would have caught the whole thing. GIRLS watch out when you are walking alone at night. this sucks. this guy is wanted for robbery and assault and the police are taking this VERY seriously.

Then an update saying:

there is apparently a guy in williamsburg who is attacking girls from behind and cutting their faces, i did not get cut, but i also hit the guy and fought him off as much as i could. the cases all might be related. still waiting to see if the security tapes come through.

There have also been attacks on the North side of the 'Burg. The precinct couldn't give many details (the detective was off today, too) and when we called the Deputy Commissioner of Public Information's office, we were told systems were down on the first try and then the line was busy on the second and third tries.

With the East Village/LES Sex Attacker caught and then released, and now this...it may be a good time to take a self-defense class. Here is one suggested seminar and class - please comment with more. Also, RightRides has also expanded its service (here's a map of the areas they serve).