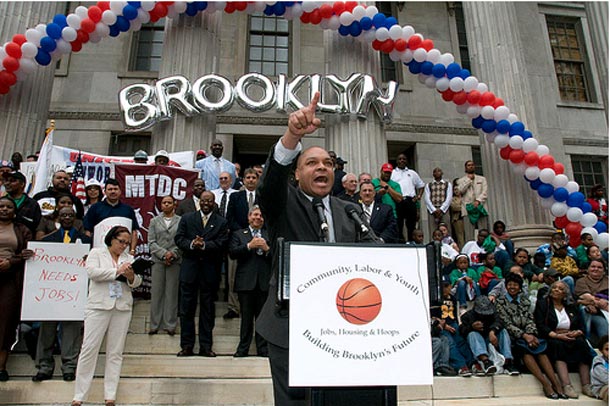 Rallies aren’t just for grassroots activists – moneyed developers can hold them too, as Bruce Ratner proved yesterday by financing an afternoon rally in downtown Brooklyn to support his beleaguered Atlantic Yards project. Organizers of the so-called “Brooklyn Day” event handed out free hot dogs and T-shirts to passersby in an attempt to drum up enthusiasm for the $4.2 billion project, though there were no free turkeys to fully evoke the Tammany Hall spirit.

Speaking about the rally to the Sun, Council Member Tony Avella said, "I think that the project itself is in jeopardy – and it was a bad one to start out with – and that is why I think they are doing this. Obviously they are trying to make the point that this has to happen immediately. But this is nonsense. Brooklyn is doing very well, and if this is about subsidies – well it ain't going to happen." 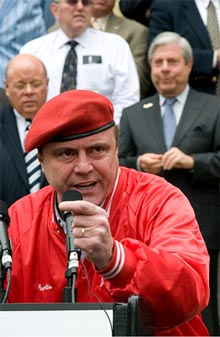 The proposed 22-acre project, which would include a basketball stadium as well as 16 residential and commercial towers, has received an unknown amount subsidies and tax breaks, but the Sun reports that figure could reach $2 billion. Al Sharpton, who had been expected to attend, was a no-show, so the crowd had to make do with other notables, like Guardian Angels founder Curtis Sliwa (pictured, left). Atlantic Yards Report has a thorough blow-by-blow of the many speeches, which included Brooklyn borough president Marty Markowitz’s rallying cry: “This is Brooklyn’s future. Nobody is going to hold it back, nobody. We deserve it.”

The community advocacy group ACORN was represented by Bertha Lewis, who gave an impassioned speech in favor of the project, despite recent news that the promised affordable housing component of the project would be delayed as Ratner focuses on getting the stadium built first. Union leaders and Nets players were also on hand, as well as State Senator Carl Kruger. Develop Don’t Destroy detected some irony in Kruger’s support, as he had adamantly opposed what he called “a backdoor approach to eminent domain” when the city announced plans to take over the Coney Island amusement district.