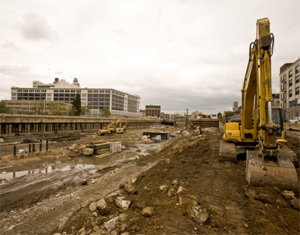 Developer Bruce Ratner's plan to build an office tower, 15 apartment buildings and a basketball arena for the Nets in Brooklyn as suffered another setback after a state Appellate Court refused to dismiss a lawsuit filed by nine property owners in the footprint of the project who are challenging the use of eminent domain. Earlier this month, Ratner had vowed to finally break ground in December, despite formidable opposition from community groups and some elected officials.

In light of yesterday's ruling, Ratner says the groundbreaking "may" be delayed another six months. The developer is also waiting for the IRS to rule on whether he can use tax exempt bonds to pay for the $1 billion arena, which he intends to build first. He's also struggling to line up financing for the rest of the $4 billion project, doesn't have an anchor tenant for the office tower, and city officials have not shown much enthusiasm about his recent request for $100 million more in taxpayer subsidies. Still, Ratner says the embattled development will inevitably proceed, issuing a statement promising that "Atlantic Yards will be built and it will create thousands of needed jobs and affordable homes."

Oral arguments in the lawsuit will be heard by the court next March. According to the Brooklyn Paper, some legal experts think the project's opponents have found a “silver bullet” to stop Ratner: a clause in the state Constitution that bars public money from underwriting any urban renewal project unless “the occupancy of any such project shall be restricted to persons of low income.” Though the plan does include some low-income housing, the majority of the residential units would be sold at market rates.