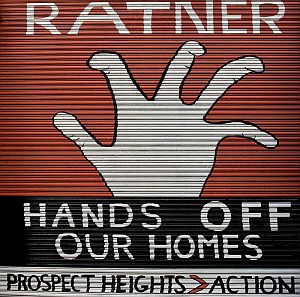 During a conference call with investors yesterday, Forest City Enterprises CEO Charles Ratner acknowledged that a window of opportunity had all but closed for the ambitious, 22-acre housing, retail and stadium project proposed for Brooklyn. But he also insisted that the delay – brought on by recession and dogged opposition from community groups – was just temporary:

The economy sometimes alters the timeline, but we have demonstrated our ability to see these projects through to completion—the value they create is well worth the time and effort. … Real estate is a long-term business. It’s a marathon, not a sprint.

Developer Bruce Ratner has recently admitted that the project would have to be scaled back or constructed in stages, with less space dedicated to low-income housing. His group is determined to start construction on the stadium, though part of the stadium’s footprint is still occupied by property owners who are fighting the eminent domain seizure of their land.

Thirty-five of the original 334 residents at the proposed site remain and, after an appeals court rejected a lawsuit brought by 11 property owners, the residents want to take their case to the Supreme Court. The plaintiffs argue their eviction would violate the Constitution because it would primarily benefit the developer, not the public.The Supreme Court is expected to decide in June whether to hear the case.

Photo taken on Carlton Avenue near Dean Street by threecee.

#Atlantic Yards
#brooklyn
#brooklyn museum
#Bruce Ratner
#construction
#development
#nets
#prospect heights
#protest
#stadium
Do you know the scoop? Comment below or Send us a Tip
A new Gothamist is coming! We’ve moved comments over to our beta site. Click here to join the conversation and get a preview of our new website.