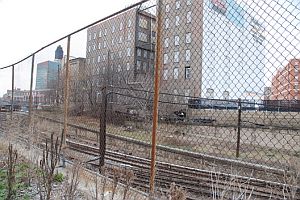 A video artist and teacher visiting from San Francisco claims she’s the latest victim of police harassment of photographers in New York – and this time the overzealous cop may have been acting on behalf of Forest City Ratner, the corporation behind the controversial Atlantic Yards project in downtown Brooklyn.

Katherin McInnis tells Atlantic Yards Report that she was on the Pacific Street sidewalk shooting “blurry, arty video” of the rail yards on Sunday when she was approached by an MTA police officer who threatened to confiscate her camera, demanded to see her identification papers and then ran a check on McInnis, presumably to see if there were any outstanding warrants she could be hauled in on.

Then, according to McInnis, the officer questioned whether she was part of an anti-Atlantic Yards organization, telling her: "You know the project is probably going to go through." She also claims the cop told her, “It's Sunday, it's 50 degrees, you could be in the mall, shopping.” The rail yards are still administered by the MTA, and photography of MTA premises is permitted, despite frequently misguided attempts by police to intimidate and, in some instances, arrest photographers.

McInnis has vowed to file a complaint over the incident; the MTA public affairs office has not commented. And a commenter on Atlantic Yards Report reports harassment by security guards while photographing the rail yards.

Photo of Atlantic Yards footprint via The Gowanus Lounge