Atlantic Terminal Ceiling Seems To Be Going For A LaGuardia Vibe

A week after a partial ceiling collapse at the Barclays Center station sent commuters scrambling, another part of the ceiling at Atlantic Terminal looks like it's on the verge of spewing debris all over straphangers. But hey, at least there's a tarp to protect us.

"As I was boarding the train and getting a ticket at the Brooklyn Atlantic Terminal, I noticed the entire ceiling looks like it is falling apart along with what looks like sewage," said Lucien Desar, who took these photos around 5:30 a.m. Wednesday morning. "Or is it runaway water from the street? [It's] dripping down, fortunately they used a plastic tarp to stop it, sort of." 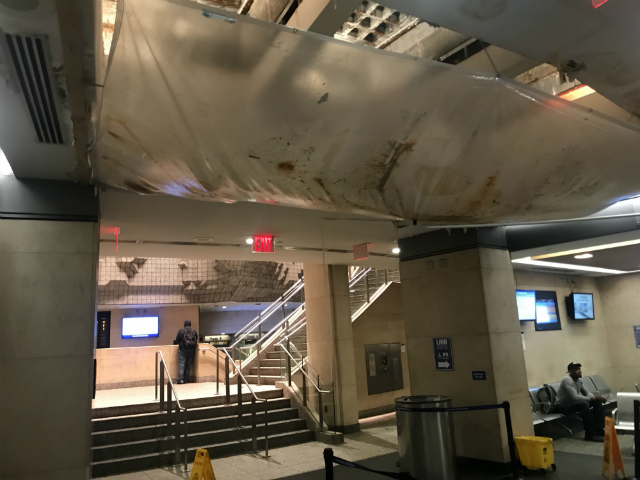 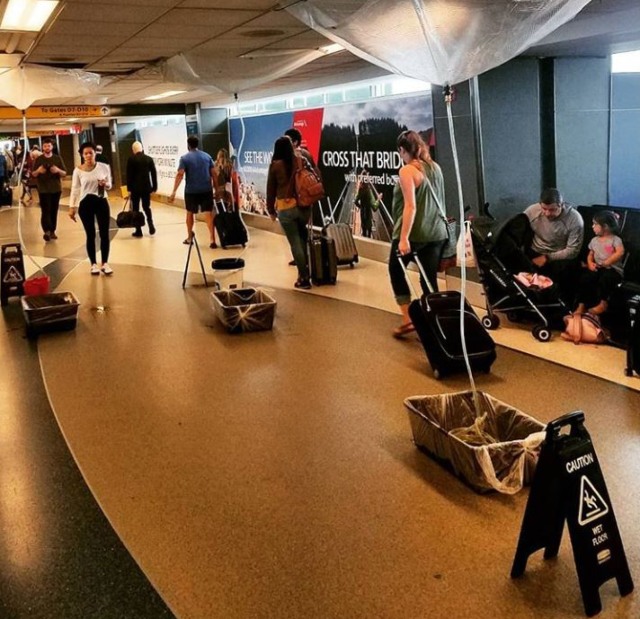 The MTA's deputy communications director, Aaron Donovan, told us that at the very least, it is thankfully not sewage: "We are conducting dye tests to identify the source, which appears to be rainwater," he said. "To combat the leaks, we are removing, waterproofing and replacing a concrete slab in the vicinity of the leaks in the picture."

Subway leaks, which often turn into subway waterfalls any time there's a major rainstorm, have become de rigueur within our mass transit system as of late. Sometimes they're powerful, sometimes they require a paddleboard, and sometimes you just gotta start swimming. MTA spokesman Jon Weinstein previously explained to us that even on a dry day, the NYCT pumps out 13 million gallons of water, so you can only imagine what it's like on a messy wet day.

"Thirteen million gallons is pumped out on a dry day because Manhattan used to be lakes and rivers and the subway is the lowest point—water drains to the lowest point," he said. "The reason we use 'pumps' is because we have to get the water back into the sewer system. As for the 'holes,' like street vents and grates, we keep them there so we can ventilate the system. And the other 'holes' like staircases allow people to get into and out of the system —so can’t plug those."

Earlier this week, the MTA touted improvements made to the system in the last year, including the fact they have sealed 2,000 leaks. If you want to let the MTA know about leaks, floods, or ceiling on the verge of collapse, you can report it to them directly by calling 511 or filing a report online.

#Atlantic Terminal
#brooklyn
#ceiling
#ceiling collapse
Do you know the scoop? Comment below or Send us a Tip