At Least 24 Cyclists Were Killed In NYC Last Year, But Gawker Wants More

This morning a tipster sent us an extremely graphic photo of a dead woman who had been crushed beneath the wheels of a flatbed truck. We declined to run the picture, but it got us thinking about a Gawker headline from Friday: "First, Kill All The Cyclists." Sure, one can shrug that off as a sensationalist headline shrewdly engineered to score page views for Will Leitch's Premium Rush review, but it also drives home a disturbing truth: motor vehicles kill cyclists (and pedestrians) with frequency in New York City. And bloodthirsty screeds like Leitch's also contribute to the warped, anti-cycling mentality that the media willfully exploits, and echoes into a real world in which investigating the senseless death of a loved one is not a priority if they happened to be riding a bike.

Leitch complains that "Bike riders have taken over this city," and says that his wrath against cyclists arises from his identity "as a pedestrian, as someone giddy to live in one of the few cities in America where you can just walk everywhere." But as a pedestrian, Leitch should be encouraging cycling: as cycling rates nearly doubled from 2007 to 2010, the number of bike-on-pedestrian crashes dropped 9%. The number of cyclist-caused crashes fell as well.

Bike lanes, which are on just over 4% of New York City's streets, also make roads safer for everyone: according to the DOT [pdf], pedestrian crashes on streets with bike lanes are 40% less deadly. Bike lanes have "a calming effect, lowering speeds and increasing driver attention."

Instead, Leitch gives motorists a pass:

Cyclists in New York always complain about how dangerous the cars are…bikes are far more a menace than cars. I've never seen a car drive down the wrong side of the street, brazenly run every red light, or just pop up on the sidewalk whenever the driver feels like it. I see a bicyclist do this every 10 seconds. And cars haven't ruined the Brooklyn Bridge either.

Cars are 365 times more dangerous to pedestrians than cyclists, according to City data [pdf]. 60% of fatal pedestrian and bicyclist crashes are caused by illegal driver behavior. 27% of crashes that kill or seriously injure pedestrians involve a driver failing to yield. More pedestrians are struck by vehicles crossing the street with the signal (27%) than without (20%). But bikes, they spoil a walk across the Brooklyn Bridge.

Perhaps Leitch, who we assume has never jaywalked or stepped into an intersection while looking at his cell phone, finds it easy to hate cyclists because there is only one kind of cyclist:

Bike riders...are, almost entirely across the board, rude, dismissive of everyone who isn't on a bike, and smug that no matter what the traffic interaction, they are in the right. 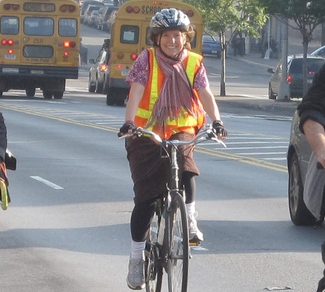 Megan Charlop, an avid cyclist and foster mom, was killed in the Bronx in 2010.

The movie Leitch uses as a springboard for his rant, Premium Rush, is apparently full of the neoprene-clad bike messengers who are a favorite target of editorial boards and Prospect Park visitors alike, but they are often not the people who are killed on the street. National studies [pdf] have shown that the people who are at the highest risk for traffic fatalities are of the lowest income level, have low educational attainment, a blue collar occupation, or are unemployed. In short, they are not bike messengers with $3,000 Bianchis. (You can see plenty of "normal" people riding bikes in the excellent Why I Ride column.)

You could forgive cyclists for believing that there is a spiteful cabal conspiring to promote falsehoods about bikes and the people who ride them, because there is. Emails obtained by Streetsblog show that former deputy mayor Norman Steisel and former DOT Commissioner Iris Weinshall (oh, did we mention she's also Senator Chuck Schumer's wife?) used their media connections to manipulate coverage of the dispute over the Prospect Park West bike lane. The coverage contained half-truths and altogether pitiful reporting to gin up outrage at "the cyclists," (one of whom happens to be Chuck Schumer. Awkward!)

And if nearly every newspaper (or website) in town denounces cyclists as law-breaking assholes, why should the NYPD devote resources to investigate when they are injured or killed? Currently there are only 19 detectives working at the department's Accident Investigation Squad, the controversially named unit that only investigates incidents in which a cyclist or pedestrian is likely to die. 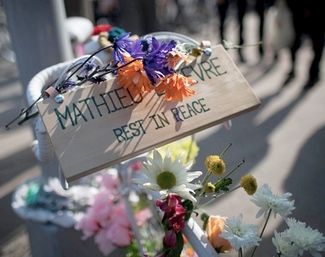 An allegedly drunk driver broke your spine? Better hire a private investigator. Killed by a driver in a Jaguar possessing marijuana? Police issue a summons for the weed, not the death. A car door swung open and caused your handlebars to impale your throat? The driver might walk away with a traffic summons.

Just this year, 12 cyclists (and 67 pedestrians) were killed through June (there are surely more at this date). Just last night, a man on a bike was struck at Flushing Avenue and Franklin Avenue—the cyclist was not expected to survive, and according to the NYPD there is no criminality suspected.

We get that it's cathartic (and good for page views!) to blow off steam by ranting about reckless cyclists. And we're not denying that with the big surge in the number of cyclists, there are liable to be more inconsiderate or reckless bikers. In 2009, a pedestrian was killed after a cyclist collided with him, and last week a pedestrian was severely injured when a cyclist hit her on the Queensboro Bridge. As Transportation Alternatives spokesman Michael Murphy recently put it, "Everyone must follow the law—bicyclists, drivers, everyone." That includes pedestrians like Leitch, who was no doubt being facetious when he proposed killing all the cyclists (and yes, we get the Shakespeare allusion). Sadly, drivers hardly need any encouragement; just ask the mother of Mathieu Lefevre, or the wife of Ray Deter, or the friends of Megan Charlop, to name just a few.