At Least 16 Hospitalized After Mass K2 Overdose In Brooklyn

What appears to be another mass K2 overdose led to at least 16 hospitalizations over the weekend at the intersection of Myrtle Avenue and Broadway in Brooklyn—a known hotspot in recent years for the dangerous synthetic drug.

Beginning on Saturday evening, and throughout much of the following day, medics rushed to treat apparent victims of a particularly bad batch of K2, who were seen either passed out or screaming in pain, often in groups, at the border of Bed-Stuy and Bushwick. A total of 16 people were hospitalized on Saturday, all of whom are expected to survive, according to an FDNY spokesperson. Several other individuals suffered apparent overdoses on Sunday, though neither the FDNY nor the NYPD have added those numbers to the official count.

"There's at least six of them in front of my house right now—two of them are lying on the street, the rest are zombies," Judy H., a resident who lives about a block away from the intersection, told Gothamist on Sunday afternoon. She pointed down Jefferson Street, as EMS officials dispensed naloxone to an unconscious man on the curb, and placed another man in an ambulance. "They smoke and then they can't move. They just knock out right away." 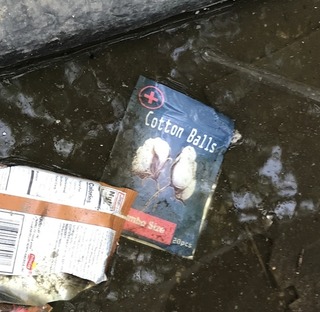 The strain of K2 is reportedly nicknamed "cotton ball," according to police

At around 6 p.m. on Sunday evening, at least four ambulances attempted to attend to several individuals collapsed unconscious on the sidewalk. Others staggered incoherently on nearby blocks, and one man had to be helped after nearly falling into traffic on Broadway.

"It's another one of those overdoses," remarked a longtime neighbor, who asked that his name not be used. "It's like this every summer, since about four or five years ago. We call them zombies."

A police spokesperson said the NYPD is currently investigating whether stores in the area are selling the drug. So far, three employees at two nearby bodegas—Big Boy Deli and Starr Deli—have been arrested for selling untaxed cigarettes. Big Boy Deli has been closed since Saturday evening, and multiple police officers were stationed outside for much of the day on Sunday. The NYPD spokesperson would not say why the deli was closed, nor confirm that it was closed under order from the NYPD.

According to Mustafa Alsaidi, the manager of Big Boy, the NYPD forced the business to shut down because of its reputation—the store allegedly provided the K2 that hospitalized 33 people in the area in the summer of 2016, and a previous NYPD raid of Big Boy turned up two packages of "alleged synthetic marijuana."

But Alsaidi and others say the deli is no longer in the business of selling K2, and that the cops would have better success looking for drug dealers on the street. "The precinct is harassing us for no reason, when I call them every day about these guys and they do nothing," Alsaidi told Gothamist. "I told them to break the store down—they're not going to find any K2. We've been shut down for 24 hours and it's still happening."

"They're messing with this corner store that used to have something to do with K2, but they stopped that a long time ago," echoed Tyrone T, a Bushwick resident. "People are getting this from the streets now, just like anything else."

In 2015, the city cracked down on the highly addictive mixture of chemicals and potpourri, raising the potential punishment for those caught selling K2 from a $250 violation to $5,000 in fines and a year in prison. The following year, Mayor Bill de Blasio claimed to have nearly eradicated the drug in the city, noting a precipitous drop in K2-related hospitalizations. A Health Department spokesperson tells Gothamist that "since 2015, the City's education and enforcement efforts have contributed to a significant decline in ER visits related to K2."

Despite the city's professed victory over K2, nearby Bushwick and Bed-Stuy residents say that the epidemic is far from over, and that the area remains a hotbed for the pernicious, highly addictive drug.

"We've had a lot of zombies here since I started," said Frank Huerta, who's worked at the Dunkin Donuts on Myrtle Avenue and Broadway for the last three years. "They're walking into walls, talking to themselves. It's an epidemic. Just real stupid shit."