The 33 people who overdosed on a bad batch of K2 in Bed-Stuy on Tuesday—renewing concerns about an inexpensive, hallucinatory drug that Mayor de Blasio recently claimed to have all but eradicated—only accounted for a quarter of the total K2 overdoses this week, according to health department statistics acquired by the New York Times.

Over the course of three days, 130 New Yorkers were hospitalized for K2 overdoses. Put another way, in less than a week New York City almost matched its official known K2 overdose total for the entire month of June. The health department and NYPD believe all of the overdose cases are traceable to bad batches of the drug, and a K2 alert has been issued to emergency rooms and healthcare providers across the city.

June's overdose total of 140 is still a far cry from last summer's peak—in July 2015, close to 1,200 emergency room visits were attributed to the drug.

Regular K2 users often experience cravings for the leafy drug, which varies in chemical makeup from batch to batch and has been associated with a wide range of physical and psychotic effects. While some users describe an elated or out-of-body high, others pass out, vomit, or act erratically. Paranoia is common, as is high blood pressure. There have been more than 6,000 K2 related emergency room visits in NYC since last year, and two confirmed deaths.

"I would just rather have more of it, than less of it," 30-year-old Ditrell Barnes, who overdosed in Bed-Stuy this week, told the NY Times. "It’s like food for me. It’s like produce. It’s like something for my brain." 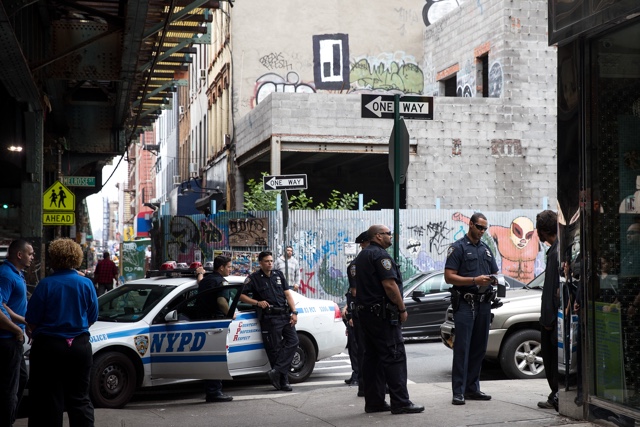 Cops patrolling the intersection of Myrtle Avenue and Broadway in Bed-Stuy this week, where 33 people overdosed on a bad batch of K2 (Getty).

"If you don't run [your business] legally, then you can expect to have very frequent visits from us until we padlock you, get court orders to put you out of business," Commissioner Bratton said at a press conference in Bed-Stuy on Thursday. "We're coming after you big time."

Coordinated inspections of five Bed-Stuy shops on Wednesday afternoon didn't turn up any K2. Instead, three workers, including one at Big Boy Deli, a suspected K2 hotspot, were arrested for selling loose cigarettes. Management at Big Boy Deli has denied that it sells K2.

Dr. Indra Cidambi, an addiction specialist based in New Jersey, says this week's spike in overdoses is symptomatic of drug manufacturers constantly trying to stay ahead of the banned-chemicals list. K2 is made from chemicals known broadly as New Psychoactive Substances (NPS), often manufactured in China, that have been designed to vary slightly from illegal compounds.

"If we decriminalize drug use, that means there is no need for the manufacturer to change the chemical formula, and we don't see this violent presentation," she said on Friday. "Because it's always changing, there's no standard drug test. And even if we find out, okay, they used K2, what are we going to do? Can I do anything for the urges? Zero."

#Bedford-Stuyvesant
#drug
#k2
#myrtle broadway
#overdose
Do you know the scoop? Comment below or Send us a Tip