At Jets Game, No Ds or Double Ds at Gate D 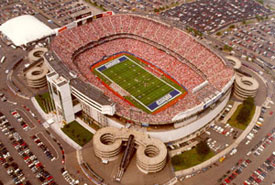 Perhaps it was the near-freezing temperatures at yesterday's Jets-Browns game that kept breasts covered, but that weather didn't stop crowds from flocking to Gate D at Giants Stadium for a halftime ritual - men yelling at women to expose their breasts and throwing bottles or spitting at them if they don't. Despite an attempt to shut down rowdy fan behavior at Gate D, things didn't seem to change that much at all since new procedures were implemented. The Times noted that there was a heavier security presence (about 50 cops and security guards) , but there was also a marked increase in people at the spiral ramp due to publicity surrounding the ritual.

There were no reports of women exposing themselves yesterday, but one came close to doing so, "she lifted her shirt just above her belly button. The crowd, which included a few fans in masks and one in a Santa Claus suit, booed when it became apparent she would not go further." Other women were told to leave the area because their presence alone was "instigating".

One Jets fan was pretty upset at the increased scrutiny from officials. Jason Pritchard told the Daily News, "If a woman wants to feel like she wants to entertain about a 1,000-plus guys and show her boobies and get everyone excited about a game, then so be it. The Jets are terrible, this is the only thing good about the Jets' game and now it's gone." Jason, keep in mind that it's not very practical for these women to show you their "boobies" when they have several layers on and temps are in their mid-30s. Just wait for next season. A phrase Jets fans should use frequently, for boobs and a winning team.

#boobs
#breasts
#daily news
#football
#Gate D
#gated
#giants
#giants stadium
#giantsstadium
#jets
#news
#people
#publicity
#santa
#santa claus
#sports
#The Jets
#the times
Do you know the scoop? Comment below or Send us a Tip
A new Gothamist is coming! We’ve moved comments over to our beta site. Click here to join the conversation and get a preview of our new website.