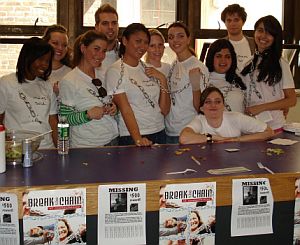 Controversy is swirling around a course offered at Hunter College that an untenured professor says he was pressured to “teach.” The course was paid for last year by the International Anti-Counterfeiting Coalition [IACC], an industry group combating the proliferation of cheap counterfeit clothes, jewelry, accessories, etc.

Hunter students were enlisted as free labor to develop a guerrilla marketing campaign for the IACC as an attempt to change attitudes about knock-off goods; the result was a fake blog written in the excited, materialistic voice of “Heidi Cee”, a young woman devastated over the loss of her precious Coach handbag. Students in the class distributed fake leaflets offering a $500 reward for the bag and later updated Heidi’s blog with a triumphant post when the bag was returned. But the reunion was bittersweet, as Heidi soon deduced that it was not only a different Coach bag, but also an “EFFING COUNTERFEIT!!!!!!!!!!!!!”

The IACC boasted that the course had a “big impact” and elicited testimonials from students such as “I was definitely one of those people that didn’t really think counterfeiting was a big deal, especially with luxury goods, but this class really showed me that you know you are stealing someone’s like creative efforts and I think that’s a really big deal.” But what kind of lesson did they learn about counterfeit blogs?

Professor Tim Portlock, who specializes in computer art, now says he was pressured into teaching the course despite his lack of marketing qualifications. He also says the IACC determined the curriculum: “It was suggested to me [in conference calls with the IACC] not to cover certain topics.” His colleague Professor Stuart Ewen is filing a complaint with Hunter’s Academic Freedom Committee: “One of the ground rules of universities is that the curriculum derives from the faculty. The notion of an outside political or economic force having an impact is in violation of AAUP standards.”

#10%
#000
#anti-counterfeit
#class
#college
#counterfeit
#course
#CUNY
#hunter
#hunter college
#IACC
#sponsored
Do you know the scoop? Comment below or Send us a Tip