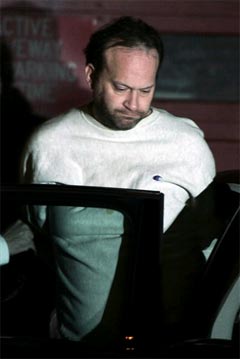 The man accused of slashing Upper East Side psychologist Kathryn Faughey to death and attacking another doctor was arraigned in court yesterday. And 39-year-old David Tarloff, a schizophrenic with a history of violence, made it quite an arraignment.

Referring to his court-appointed lawyer Reginald Sharpe, Tarloff said, "I'm not stupid. I won't talk until I have a real attorney. I was a real attorney...He isn't an attorney. I saw his license. Look at him! He's white! He is not Rev. Sharpton! I don't know who he is. I'm sorry, this man is lying. There is no proof that he is an attorney." Sharpe said, "Clearly [Tarloff] needs to be examined."

Justice Ruth Pickholz ordered a psychiatric exam at Bellevue for Tarloff.. She also said he would receive a public defender "from the homicide panel." Tarloff said, as he was led from the courtroom, "Now I'm getting an attorney."

Tarloff's younger brother Robert, who spoke from their father's Staten Island home, said, "No one wants this to happen to anybody, especially knowing the gruesomeness of the details and having it be our own family. We’re just trying to deal with this as a family.” He mentioned that his parents had tried to keep him hospitalized, but his brother kept being released (the Daily News has some more details about that). Robert Tarloff added, "I hope [Faughey's] family has peace now that someone has been caught."

Police believe that Tarloff killed Faughey with a knives, including a meat cleaver, on Tuesday night. When her office mate, Dr. Kent Shinbach, heard her screams and tried to intervene, Tarloff allegedly attacked him as well and stole his wallet. Tarloff's handprints matched those found at items the killer left at the crime scene; Tarloff also claimed Shinbach had institutionalized him once.