Astroland Negotiations For 2008 "At a Standstill" 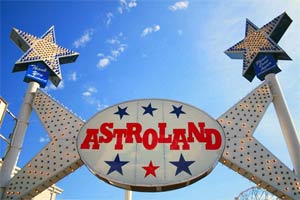 Astroland's stay of execution may have hit a snag. While there were hopes that Thor Equities, the developer who has purchased the amusement park for $30 million as part of its ambitious Coney Island development plans, and Astroland operators could work out a deal, the Post reports that Thor is looking for an increase on the order of 17 times the current rent.

That means the park operator would have to pay $3 million for the 2008 season, and naturally, the operator prefers to pay its usual $170,000 rent. The Post explains that the higher rent is to recoup the $30 million laid down for the park. This comes as some city officials say Thor's $1.5 billion plan is dead in the water (though there may be potential for Thor to switch land).

Astroland's current lease is up on September 8. They tell the Post that the "ball is in [Thor's] court." And Kinetic Carnival notes that AOL Travel has Coney Island on its list of top ten amusements parks but warns people that it may be the last season.