Astoria residents packed into the Variety Boys & Girls Club on Monday night to voice their concerns about Mayor de Blasio's proposed $2.5 billion Brooklyn Queens Connector (BQX). Many argued that the streetcar, which the mayor has called a "noble experiment" in outer-borough transit, would burden low and middle-income taxpayers while serving real estate interests and high-rise residents along the Queens waterfront.

"If this is going to alleviate some of the subway crowding, that's good," said Mary McClary, 70. "If the fare is going to be compatible with subway, that's even better—provided that the streetcar is not just for the people who live on the waterfront, who can afford to pay $3,000 in rent."

McClary, who has lived in NYCHA housing in Astoria since 1990 and is a member of the affordable housing coalition Justice For All, said she's seen an influx of development in recent years. "We used to have a skyline, you know?" she said, adding, "the housing that's coming is not affordable for myself."

Monday's "visioning session," hosted by the Department of Transportation with the NYC Economic Development Corporation (EDC), was the first of several planned for neighborhoods along the proposed route in the coming months. The 16 mile track would eventually run from Astoria to Sunset Park along the waterfront, connecting tech and startup hubs like Industry City, Long Island City, and the Brooklyn Navy Yard, in addition to new waterfront residential developments in DUMBO, Astoria, and Long Island City.

"There's potential for us to... bring [tech] industries here," said Astoria Council Member Costa Constantinides. "The next Twitter, the next Facebook, could be built here in Astoria." 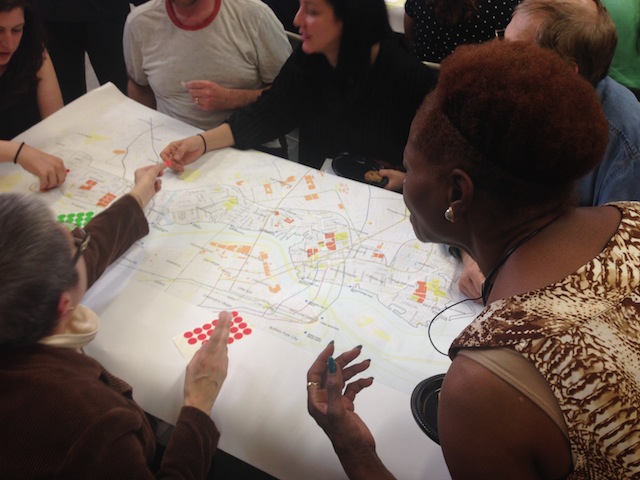 Astoria residents pore over a map of their neighborhood, identifying streets that might be suitable for a streetcar (Emma Whitford / Gothamist).

The EDC has touted the BQX as a green transit alternative that would replace car traffic. One trip would cost $2.75—the equivalent of a metro card swipe—and connect Brooklyn and Queens residents without a transfer through Manhattan.

But some critics have countered that the 405,000 New Yorkers who live along the route—including 40,000 NYCHA residents—would be better served by expanded bus service, which would be cheaper and quicker to implement. The proposed streetcar route also runs through flood zones, and the MTA has yet to commit to a free BQX transfer.

"I think this is foolish," said one retired Astoria Heights resident who declined to provide his name. "I don't see why they can't just put buses in for a fraction of the cost."

"I was in construction for 40 years," added Pete Triilivas, 67. "If you're telling me $2.5 billion, it will be $10 billion. Everybody is going to lose their hair [before this is finished]."

And while Mayor de Blasio has argued that "a lot of people are just going to take [the BQX] from one point to another without transferring," the City's preliminary analysis suggests that current demand for the streetcar is low—about 51 commuters would use the BQX to get from Astoria to DUMBO on a typical weekday, and none would take it in the opposite direction.

Astoria residents said Monday that transfer points to buses and subways would be crucial.

Vernon Boulevard, on the western edge of the neighborhood, runs along Astoria's rising strip of high rise development, where two bedrooms rent for north of $4,500 per month.

"Vernon wouldn't connect well to the F at 21st Street, or the E and M on 23rd," said Steve Scofield, an Astoria resident.

21st Street, which intersects with the F train at Queensbridge and passes by the NYCHA-run Ravenswood Houses, was a popular suggestion on Monday. Queensboro Plaza, four blocks East, would connect riders to the 7, Q, and N trains. But residents worried that the BQX would conflict with traffic calming efforts on the already-congested corridor. Last month, a hit-and-run driver killed a pedestrian on 21st Street.

"We'd like to see more traffic lights on 21st Street," said Scofield, who is also a member of the advocacy group Transportation Alternatives. "What does that mean for a light rail, which is already going to have running issues operating in mixed traffic?" 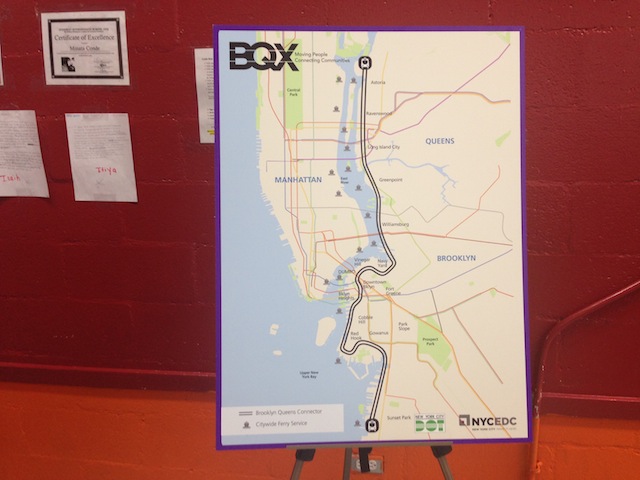 A poster board of the proposed route set up at last night's meeting (Emma Whitford / Gothamist).

The City hopes to break ground on the BQX in 2019 and begin service in 2024. The EDC will present a preliminary route this fall.

The EDC said Monday that the streetcar will cost about $30 million per year to maintain, on top of construction costs. Officials predict that it will increase property values along its route, effectively paying for itself in increased tax revenue.

"This happens to be a place of particularly concentrated...economic growth, with a particular ability to get that revenue," Mayor de Blasio told reporters earlier this year.

A resident of the Columbia Waterfront District, another neighborhood on the BQX's planned route, attended the Astoria meeting to share his perspective as a broker.

"The landlords, whatever their increase is, they’re going to start to pass it on [to their tenants],” said the resident, who asked not to be named because he works in the real estate industry. "It looks like this is going to displace people who are now rooted in their communities."

Theresa Ching, 44, a Vernon Boulevard resident and realtor with Douglas Elliman, said on Monday that she was "very excited" about the BQX. "Now that Brooklyn has been fully built in and developed," she said, "[developers] are coming over into Long Island City. Building a streetcar is feasible now."

"It will certainly make gentrification go faster, unfortunately," she conceded. "But hopefully with Mayor de Blasio being very conscious and mindful of these things, we won't chase them all away. There will be real affordable housing that gets built along with the luxury housing."

#astoria
#bqx
#brooklyn queens waterfront
#light rail
#red hook
#streetcar
#original
Do you know the scoop? Comment below or Send us a Tip