Members of several different community groups attempted to storm the offices of a real estate developer in Long Island City this morning for doing business with a contractor who allegedly paid workers based on a "racially-tiered hierarchy of wages."

Alma Realty, which is currently under review by the City Council for the massive Astoria Cove development in Queens, hired SSC High Rise Construction to work on a project on Vernon Boulevard.

A recent Daily News report showed that SSC paid Irish employees $25 an hour, blacks $18 an hour, and Latinos $15 an hour. 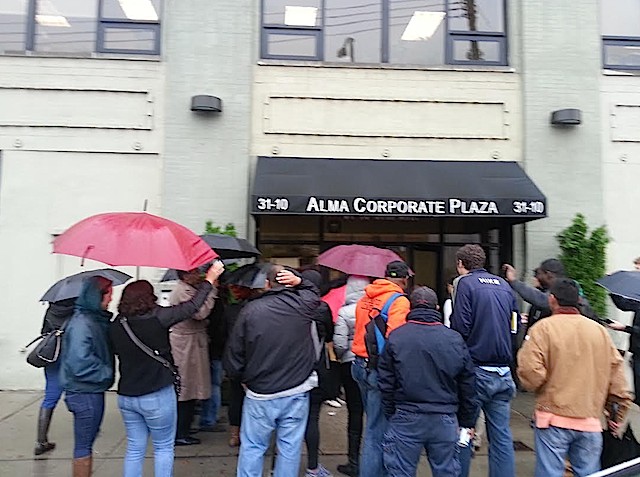 Alma has already come under fire for not including enough affordable units in their luxury project when NYC is locked in an intractable affordable housing crisis.

"We need Alma to bring jobs, fair standards, and affordable housing to the people of New York City, and we need to meet with the president of the company to make sure that they will follow through with their promises," said Maritza Silva-Farell a senior organizer at ALIGN, the Alliance for a Greater New York.

The community groups insisted they had tried to get in touch with Alma's president to schedule a meeting, but did not receive a response. The group was rebuffed at the entrance by security, who told them again to make an appointment.

Eventually an employee of Alma arrived and promptly shoved a community member out of his way before declaring the group a fire hazard and exiting through a stairwell.

"It's very clear they don't want to speak with us," Silva-Farell told Gothamist. "And to confront the community like that just because we want to have a dialogue? It shows exactly the type of people they are."

Alma has not yet responded to a request for comment. 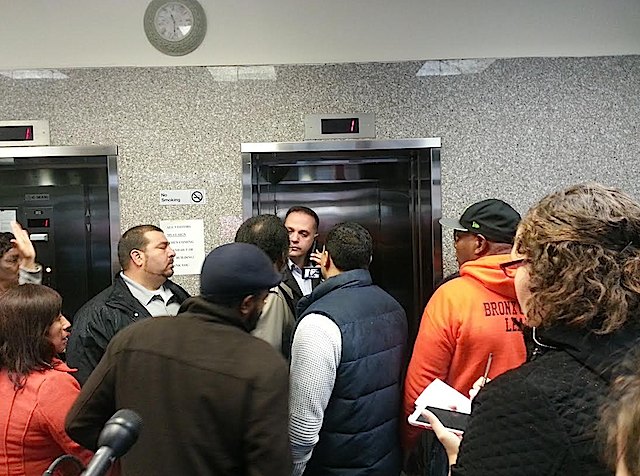 Alma hired SSC High Rise for the Vernon Boulevard Site, despite the fact that SSC was found guilty of using the racially-tiered pay system for their employees in 2011. While the real estate developer has promised to not hire the contractor for the proposed Astoria Cove project, Alma has also been accused of illegally jacking up rents on rent-stabilized apartments it owns in Brooklyn.

After reading a statement imploring Alma to "establish permanent affordable housing" at all of its future projects, New York Communities For Change member Flenoy Withers exited the nondescript office building with a promise.

"This is just the beginning. We'll be back."

#affordable housing
#alma realty
#astoria cove
#de Blasio
#development
#original
Do you know the scoop? Comment below or Send us a Tip