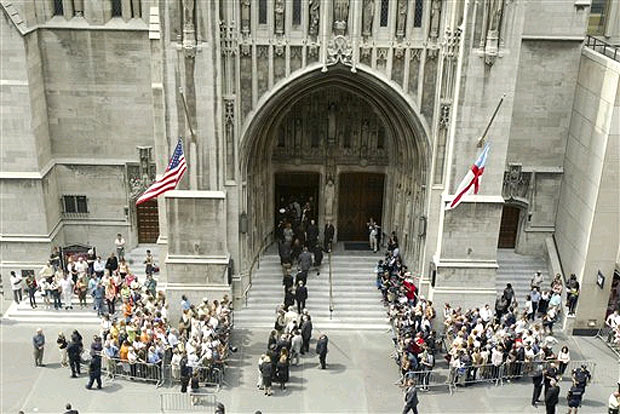 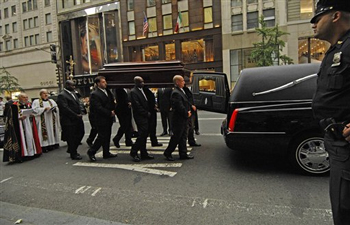 Brooke Astor's funeral was held yesterday afternoon in midtown Manhattan, at Saint Thomas Church on 5th Ave. and 53rd St. The lineage and personal generosity of Mrs. Astor and the array of famous attendees at her funeral made it a widely covered news event. The New York Times reported that officiants at the funeral requested that all cell phones be turned off at the beginning of the service, although a Gawker correspondent pointed out that this did not stop the woman sitting next to him from allegedly loudly typing away on her BlackBerry throughout the service.

Thanks to the technological miracle that is webcasting, anyone was capable of attending and covering Mrs. Astor's funeral online. We're sure that someone from The New York Times was actually there, but the paper's CityRoom blog live-blogged an account of the funeral to keep readers informed. New York magazine's Daily Intelligencer site live-blogged the event, and was impressed with Mayor Bloomberg's tribute to the late philanthropist. "There's a Yiddish saying that our mitzvahs, or good deeds, are the clothing of our soul," [Bloomberg] said. "In more ways than one, Mrs. Astor was always the best-dressed woman in New York."

All told, about a thousand people attended Astor's public funeral. Charlie Rose and New York Public Library president Paul LeClerc were among the pallbearers, while dignitaries like former Mayors David Dinkins and Ed Koch as well as former Secretary of State Henry Kissinger, entertainers like Jessye Norman and Whoopi Goldberg, and socialite friends such as Annette de la Renta and David Rockefeller were in attendance. Astor's only son Anthony Marshall and his wife Charlene did not seem to speak with Marshall's son Philip, whose accusations that his father and step-mother were mistreating Astor a year ago kicked off the battle over her estate.

When Astor's coffin was led outside, the people waiting on Fifth Avenue applauded. The Daily News reports they yelled, "You were a great lady!" and "She was a beautiful lady!" and "I tip my hat to you!"

The arrangements for the actual burial services for Brooke Astor are thus far private.