A Staten Island man died as police tried to take him into custody Thursday afternoon, and the incident was caught on video by a bystander. 43-year-old Eric Garner, known as "Big E" to many in the neighborhood, went into cardiac arrest as police attempted to handcuff him around 4:45 p.m. outside 202 Bay Street in Tompkinsville. The NYPD says they were arresting him for selling untaxed cigarettes, but witnesses say he had just broken up a fight and was wrongly targeted by police.

In the video, which was obtained by the Daily News, Garner is seen telling officers, "I was just minding my own business. Every time you see me you want to mess with me. I’m tired of it. It stops today!" The Staten Island Advance reports that Garner was out on bail with three pending criminal cases against him, all involving charges of possession and sale of untaxed cigarettes.

Another witness tells the Advance that Garner "tried to break up the fight—the two guys fighting, they saw the cops coming and walked away." 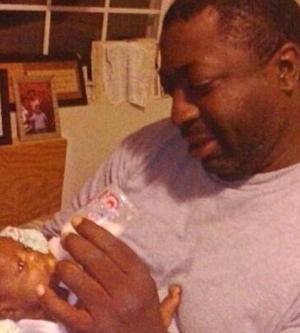 (Garner and his infant child)

When more officers arrived at the scene and attempted to handcuff Garner, who weighed 350 pounds, he's seen swatting their hands away and saying, "Don’t touch me, please." One officer puts him in a chokehold as the others struggle to pull him to the ground and get his arms behind his back. Garner, an asthmatic, can be heard repeatedly saying, "I can't breathe."

"They jumped him and they were choking him," says Ramsey Orta, who knew Garner and took the video. "He was foaming at the mouth,” Orta told The News. “And that’s it, he was done. The cops were saying, ‘No, he’s OK, he’s OK.” He wasn’t OK.” Another friend of Garner says, "He’s a very big man, very intimidating, but he’s just a big teddy bear. He’s the nicest guy. I can’t believe what I saw. That’s no way to do an arrest."

One police source tells the Advance, "He absolutely resisted arrest. He took a fighting stance." The official NYPD statement asserts that Garner was selling untaxed cigarettes. "Upon attempting to arrest the suspect for the violation, the suspect went into cardiac arrest and was transported by EMS to Richmond University Medical Center where he was pronounced DOA. The Medical Examiner will determine the cause of death."

Garner leaves behind a young child and a wife, Esaw Garner, who tells the News her husband was unable to work because he suffered from chronic asthma, diabetes and sleep apnea. "When I kissed my husband this morning, I never thought it would be for the last time," Garner says.

The Advance reports that within an hour after Garner's death, handwritten signs hung near the incident declared, "no justice, no peace" and "Another innocent black man has been killed by police brutality. The NYPD must be stopped!" One police source tells the News, "A guy is dead in our custody. That is always a potential problem."

UPDATE: Mayor de Blasio, who is en route to departing tonight to Rome for a vacation, issued this statement shortly before 11:30 a.m. today: "On behalf of all New Yorkers, I extend my deepest condolences to the family of Mr. Garner, who died yesterday afternoon while being placed in police custody. We have a responsibility to keep every New Yorker safe, and that includes when individuals are in custody of the NYPD. That is a responsibility that Police Commissioner Bratton and I take very seriously. We are harnessing all resources available to the City to ensure a full and thorough investigation of the circumstances of this tragic incident. The NYPD’s Internal Affairs Bureau is working closely with the Office of the Richmond County District Attorney, which is leading this investigation."

#big e
#eric garner
#staten island
Do you know the scoop? Comment below or Send us a Tip