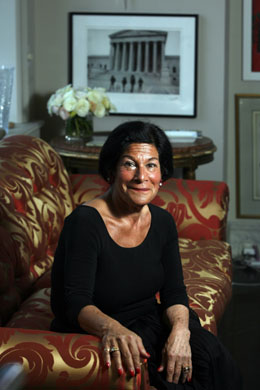 There's finally been an arrest in the murder of Linda Stein. Yesterday it was reported that the police were interested in re-interviewing Stein's assistant, Brooklyn resident Natavia Lowery, who has a shady past involving identity theft. So it's not all that surprising that today the NYPD announced Lowery has been taken into custody. They found the 26-year old in Virginia Beach, apparently visiting her boyfriend.

Police spokesman Paul Browne said Lowery "made statements implicating herself" in the killing. Lowery was taken to the 7th Precinct in Manhattan.

Sources said Stein hired Lowery in early summer after firing her previous personal assistant. Stein, an old-school style realtor, conducted most of her business through personal contacts and lunch and dinner meetings.

Lowery handled the computer work, setting up appointments and handling some of the financial details.

Those financial details? Stein "trusted Lowery with her big bucks celebrity clients' financial secrets, including Social Security and bank account numbers." Stein, as most people in Lowery's life, was unaware of her previous arrest. As for why she did it, The Times reports the assistant claimed Ms. Stein “just kept yelling at her," and not just that day, the battle was apparently ongoing.

Update: Police Commissioner Ray Kelly gave a press conference. According to Newsday, he revealed that "Lowery told detectives that Stein was 'verbally abusive' to her the day of the murder, using profanity and derogatory language." Plus: "She also said Stein blew marijuana smoke in her face before she snapped and hit Stein six or seven times with a yoga stick, Kelly said." Um, what exactly is a yoga stick? Besides being a murder weapon.