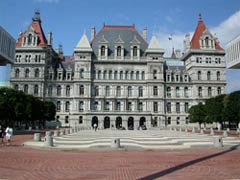 After longtime Assemblyman Anthony Seminerio's arrest on bribery charges, the State Assembly apparently held a secret meeting to discuss, per the AP, "tougher rules over disclosure of outside income by lawmakers."

In the criminal complaint against Seminerio, there were also references to "Assemblyman No 1," Assemblyman No 2" and "Senator No 2"--prompting lawmakers to wonder who's who. Seminerio's $500,000+ in bribes were apparently accrued after he set up a shell company to accept payments; current rules do not require lawmakers to disclose who their clients are.

While Assembly Speaker Sheldon Silver wants an overhaul of the rules, it's unclear how far he will go. As the Post reports, Silver "earns an undisclosed income from powerhouse Manhattan law firm Weitz & Luxenberg." And for reference, the Post adds the current rules allow them to "earn unlimited amounts of outside income" while their "official salaries can exceed $120,000 a year and are the third highest in the nation."