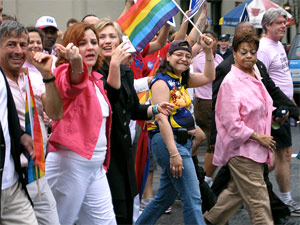 The State Assembly voted in favor of allowing same-sex marriages in New York. Newsday said it was the first time a gay marriage bill was "debated publicly in one of the houses of the State Legislature Tuesday." However, the bill is not expected to make it pass the Republican-controlled Senate. Senate Majority Leader Joseph Bruno said, "We're not doing gay marriage by [tomorrow's adjournment], that's for sure."

The Sun had a breakdown of how the NYC Assembly members voted:

Hikind said before the Assembly, "There are certain things that do not change for me unless God sends a message to me," - and then thunder sounded, causing everyone to laugh. And the bill was introduced by Assemblyman Daniel O'Donnell, who represents Morningside Heights and is the brother of Rosie.

And though the Senate won't deal with gay marriage before the session is over, we're sure that the Gay Pride Parade this weekend will be celebrating the Assembly's work. But there's some debate about what Gay Pride means and what class and race may have to do with attending the parade - check out the Observer's article, Goodbye, Mr. Chaps.