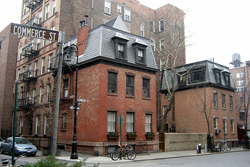 Good news for pepper spray purveyors: police in the Sixth Precinct, which includes the West Village, say crime has risen in the area, with 16 robberies reported in the 28-day period ending December 7th, compared with 12 over the same period last year. The Post has details on a few of the incidents, which have left residents in the tony neighborhood clutching their pearls in terror. A 25-year-old banker had her jaw broken last week as she strolled to The Spotted Pig around 11 p.m. She tells the tabloid, "Anyone who lives in the West Village knows that you walk everywhere. We walk at all hours."

Maybe not anymore; the unidentified victim says that when she noticed her two assailants walking toward her down the block, even "from a distance, I felt like they didn't belong. I had a strange feeling." She believes one of the men had a gun. "They pushed me to the ground... I crumbled pretty easily because I thought it was a gun... I started screaming, 'I don't know what you want. I'll give you whatever you want. They continued to punch me.'" Thankfully, she was able to get her hands on her mace and sprayed the thugs in the face. They made off with her earrings, and she got taken to St. Vincent's with a broken jaw.

And the crime wave isn't just happening at night; according to today's Post, a woman was walking with her her 6 and 8-year-old sons on a recent Sunday afternoon, when, she says, "A guy approached me [on West 12th Street] from the front, and he grabbed me all the way around. He said, 'It's going to be all right.' He tried to take my bag as well—that's when we started struggling. I started screaming, 'No!' and he ran away."

Scary stuff, but the NYPD insists the "crime cluster" isn't part of a pattern. 171 robberies were reported in the Sixth Precinct this year through December 7th, down 14 percent from the 198 robberies reported in the same period last year.