This morning's commute is canceled, at least for those unfortunate souls who attempted (and may still be attempting) to take the N/W line from Queens. Straphangers who showed up at the Astoria-Ditmars Boulevard stop were reportedly turned away after lining up just to enter the station at rush hour. We're told that MTA officials abruptly informed crowds that trains had stopped running and they'd need to find an alternate route, which—from that particular vantage point—does not exist, at least not by subway train.

*Cue MTA cackle into the void*

The scene at 30th Ave in #Astoria this morning. Couldn't even get up the stairs to the platform. @NYCTSubway pic.twitter.com/EX4O4ceFlB

Frustrated rider Josh Abrams told Gothamist that he waited for 20 minutes to get onto the platform at Astoria-Ditmars, his daily stop for over eight years. "I've never seen it this bad," he said. Around 8:19 a.m., Abrams continued, officials announced that everyone could just forget it: There would be no trains to Manhattan, and all these would-be passengers would need to find another way to get to work. "But they didn't bother to suggest one," Abrams added, "probably because there was no R service either." Even if there were, though, that wouldn't have immediately solved anyone's problem. Just take a look at the map as a sad trombone calls out somewhere in the distance: 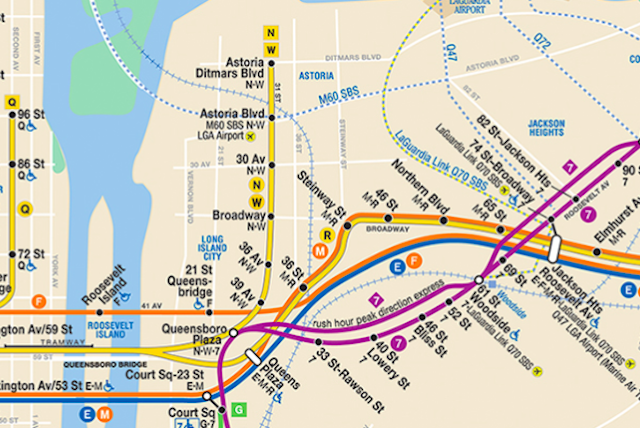 Piling insult on top of egregious inconvenience, the New York City Transit Authority's Twitter apparently presented a different version of events. "Of course the subway Twitter feed was lying to us, claiming that trains were running with delays when they were not running at all," Abrams said. "I had to give up trying to get to work this morning since it was just hopeless at that point."

Eventually, the transit authority did correct course, informing passengers that the wild delays they'd weathered stemmed from switch trouble in Brooklyn, which bled all the way up the line to Queens. As a result, the D, N, R, and W lines were perfectly screwed, along with everyone who attempted to ride them over the East River. Curiously enough, the MTA directed the masses to the E and F lines, which, again, look at the map. I mean come on.

For service to/from Queens, consider taking an E or F train. Service has been further delayed because of a train’s brakes activating near Union St. We’ve been able to move that train & local service is restored between 36 St (Bklyn) & Atlantic Av-Barclays Ctr. (2/2)

Absent any other affordable choice, people flocked to the buses, triggering a separate shitshow:

Everyone scrambling to catch the bus at Astoria Blvd @ 31 St. after being advised that n/b N and W trains not running. ⁦@NYCTSubway⁩ pic.twitter.com/jDmKC15rTK

While the MTA presumably hunted for the source of this problem, stations overflowed with diverted straphangers waiting on trains and answers that would not come. "You cannot walk the platform or exit safely," one Twitter user complained. "This happens far too often."

Dangerous crowding conditions in Astoria with no announcements being made in the station. Enough is enough!!! Why must I always be 45 minutes late to work in the morning?!?!! pic.twitter.com/gdTOQBpuBO

Apparently, a select few straphangers did eventually "enjoy" a train surprise? Who the hell knows.

Pandemonium at 30 AV. After an announcement that train service was suspended, two trains showed up. Disgusting. Your new leadership regime has improved nothing.

@NYCTSubway a Manhattan bound N train hasn't stopped at Astoria blvd for more than 15 min. But meanwhile I can see a train that's been sitting at ditmars blvd for 15 min and hasn't come toward us. What the hell is going on?!

The MTA seems to still be working out this particular kink, but I for one will be shattered if this latest collapse turns out to be the direct result of Brooklyn's newly installed fast trains. Please can we have just one nice and efficient thing to look forward to in this mandatory subway hell? Please??

#astoria
#hellscape
#MTA
#n train
#r train
#subway
#w train
#we the commuters
Do you know the scoop? Comment below or Send us a Tip