Ask A Reporter: What Can I Do About The Overwhelming Amount of Litter In My Neighborhood?

Q: “Litter is a big issue in my neighborhood. How do I get the Department of Sanitation more involved to clean it up and provide closed trash bins?”

A: The good news, believe it or not, is that New York City streets and sidewalks are actually the cleanest they’ve ever been, according to city records going back to 1975.

Still, the person asking this question is concerned about their neighborhood. And despite the overall progress, everyone, including Department of Sanitation commissioner Kathryn Garcia, agrees that litter is still an enormous problem for the city.

“There seems to be no end to the reminders that people need about not littering,” she said in a phone interview.

Just last year, the Department of Sanitation launched a public service campaign around littering. But it’s not the only department responsible for this blight.

A gum wrapper, for example, dropped by a careless walker in a public park is the responsibility of the parks department until it blows into the street, at which point the Department of Sanitation briefly takes ownership before the wind kicks it up again and takes it to the door of a public housing building, where it becomes the responsibility of the New York City Housing Authority.

This lack of clarity about who to call when the situation gets out of hand can lead to inertia and incredible dereliction of duty. Case in point: a story I reported from Brownsville, where the city once allowed nearly seven tons of trash to accumulate over 30 years on a sidewalk next to a NYCHA parking lot.

So, how do regular folks take control of the litter problems in their neighborhood?

Along with Garcia, I spoke with James Brodick, Director of Community Development and Crime Prevention with the Center for Court Innovation, to get some useful tips. The Center has a broad focus on reforming how young people interact with the criminal justice system, so it offers community service programs across the city, including neighborhood cleanup initiatives. Brodick helps oversee those cleanup programs — and after years of interacting with the Department of Sanitation, the man knows trash.

The city is responsible for sweeping the streets (hence, the alternate side parking dictate that all New Yorkers with cars must live and breathe by). 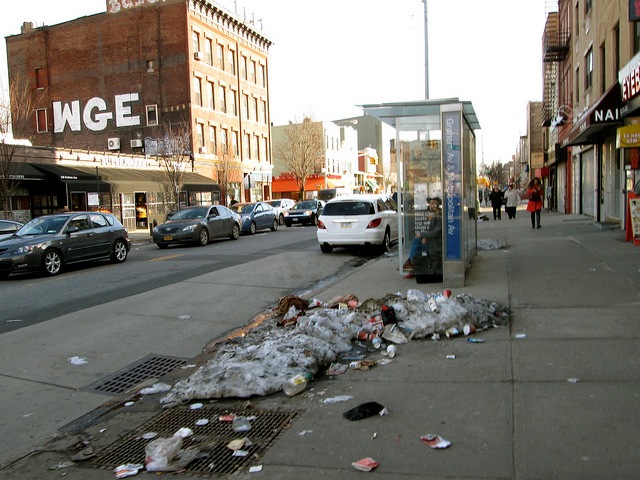 What can you do on your own? It’s okay to think small, Brodick said.

“I would first say, ‘What do you feel like you can do?’” he said. “Is there [an] area that you would want to kind of adopt and start to model behavior in your neighborhood?”

He suggests organizing a few neighbors to divvy up your block or create a rotating weekly schedule for folks to pick up litter on the block.

Garcia pointed out that “litter attracts litter.” Seems obvious, right? But remember the 30-year-old, seven-ton mountain of trash I mentioned earlier? It started small. Don’t let even a little bit of litter pile up.

Organize cleanup days. Some situations require more hands on deck. The Sanitation Department has a guide for organizing a volunteer cleanup, and it will provide gloves and trash bags. They’ll even loan brooms and — if, unfortunately, the occasion calls for it — shovels and rakes.

“I think any time we're engaging with the public that's very helpful,” Garcia said. And an added bonus of a collaborative cleanup days, she added, is the vigilance they can foster in the community.

“Because if you're part of the picking up then you actually are even less tolerant of the people who are literally throwing things on the ground,” she said.

Meet with local sanitation folks. Brodick, in his role overseeing cleanup programs for the Center for Court Innovation, said that local district managers will help residents troubleshoot trash problems. He has helped arrange for block associations to meet with sanitations officials, which have yielded:

He also noted that street and sidewalk scorecards help incentivize sanitation managers to keep neighborhoods clean and respond well to residents. So utilize them.

Sanitation officials said the best way to arrange meetings is to email their Community and Government Affairs office. To flag problems or raise other questions related to service, call 311.

Adopt or sponsor a litter basket. Yes, this is a thing. Residents or business owners can adopt one of the city’s green litter baskets in order to keep the things from overflowing.

The Sanitation Department will provide plastic liner bags, work gloves, a dust bin and a broom. Your job: monitor the basket and when it is three-quarters full, tie up the bag and replace it with a new one. Sanitation workers will collect the garbage as usual. This program could be especially effective on commercial stretches, where baskets fill quickly, or near busy transit hubs.

Sponsoring a bin can also mean that instead of the standard, green wire basket, the city will give you a larger, sturdier bin, maybe even one with a lid. These bins are especially helpful in high-traffic areas. Many City Council members purchase them for their districts. Businesses do, too.

Several locations around the city have “smart bins” with built-in trash compactors. These bins can hold five times the amount of garbage as a regular trash can, and they use the Internet to signal when they’re nearly full. They are extremely expensive, though — upwards of $7,000 — and are generally purchased and maintained privately, although the city owns a few.

On a related note, the city is evaluating new designs to replace the green litter basket, which has been around in some form since the 1930s. The city hopes the new basket design will reduce litter and keep the rats at bay.

Still, there is no guarantee, sanitation officials said, that the proposals will actually yield a replacement for the more than 23,000 green litter baskets around the city.

Address other conditions that could lead to litter. Nothing beats the proven strategies of not littering and picking up litter. However, Brodick said, there are other variables involved, too.

Find organizations that can help. Besides working through a block association, you should find out if your neighborhood has a Business Improvement District that can help keep the sidewalks clean. Brodick and the Center for Court Innovation have helped businesses form a BID.

Agencies like NYC Service and the non-profit Citizens Committee for New York City can help with resources for block beautification. They also have a Love My Block grant initiative to help with cleanup.

Plus, there are numerous community service-oriented groups, like the Center for Court Innovation, where Brodick works, that will help residents both cleanup and learn how to organize neighbors for long-term change.

By
Stephen Nessen
and
Clayton Guse

Advocates praised the investment, which will result in more programming for students with emotional disabilities and autism.

Advocates praised the investment, which will result in more programming for students with emotional disabilities and autism.