Ask A Reporter: How Do I Turn This Ugly Wall In My Neighborhood Into A Beautiful Mural?

Q:“I want to campaign to turn a really horrible, big gray wall in my neighborhood into a mural. How can I get that process started?”

A:Well, you’ve already cleared the first hurdle: You have a wall! The others are a little more difficult but doable. You need permission from the wall’s owner. You need funding. You need an artist. You need community input and probably some volunteers to help. I’ll tell you what I’ve learned about these steps. But first I want to say how much I love this question.

Advocating for a mural is not just about beautifying a space, it’s also about the collaborative process you must go through with neighbors to make public art like this happen.

For insight into kickstarting the process, I turned to Groundswell, a non-profit that has created approximately 600 mural projects over its 22 years in New York City. The organization operates with a social justice mission and brings artists and young people together to see a project to fruition.

Groundswell told me they get calls almost every day from curious New Yorkers looking to start their own projects.

Eric Miles, the organization’s Director of Programs, said there are several questions to keep in mind once you set your sights on a blank wall.

“Who is going to see this mural? Who wants to have input into the theme and the messages and the symbolism in this mural?” he said. “And it's important for either individuals or community partners to think about this from the very outset of the project.” 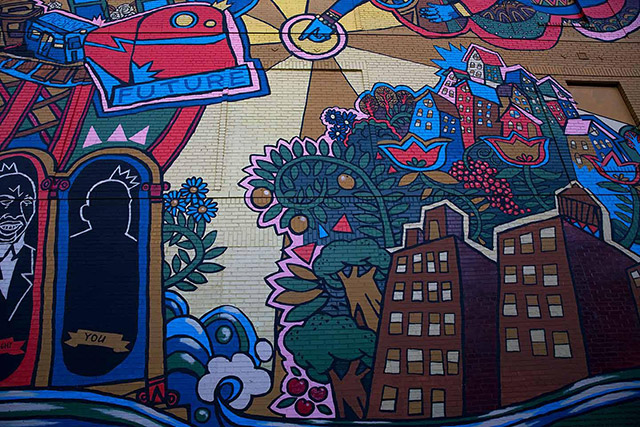 A detail of a Groundswell mural in Brownsville, Brooklyn. (Clarissa Sosin)

Then embark on these steps:

First, if you have a specific wall in mind, you must identify its owner and secure permissions. The wall may be privately owned or fall under the authority of a city or state agency. And, naturally, every government agency — be it the Department of Transportation or Department of Education or NYCHA — has its own process for authorizing murals.

Miles noted that each agency may have different stipulations for the mural’s lifespan — usually stipulated by a contract. Don’t gloss over that part. The process is rewarding but lengthy, and you want the mural to exist for as long as possible.

Next, think about funding. Money could come from a variety of sources such as non-profit groups, grants, participatory budgeting, your local City Councilperson, PTAs, corporations or elsewhere. Because fundraising is usually a lengthy process, Miles suggested thinking about projects a year out.

Groundswell helps with some of the legwork of securing permissions and raising funds, such as co-writing grants with community groups.

It helps to connect with any long-standing organization that has relationships with funders and city agencies at the beginning of a mural project. In addition to Groundswell, New York Cares and Creative Art Works are also groups doing these projects. (Please add any other you know in the comments below.) That’s not to say that individual street artists or a group of neighbors cannot succeed on their own, because they can — and do.

The next step is to begin the community design process. This takes community organizing, meetings and listening — the local Community Board leaders can help you with this. Remember, you’re not the only one who’ll be looking at and living with this mural. There may be tense conversations around who wants what or issues like gentrification. But mainly, Miles said, people just have a lot to say.

“I feel like so many of our community engagement sessions are opportunities for people to tell their stories,” he said, and added, “Sometimes those conversations only come out when there is a sounding board or something to talk about.”

“They are a great vehicle for generating community consensus about any kind of a community initiative,” she said.

So think of your mural not just as public art, but as community convener. Artists usually help during community meetings by pulling out ideas and themes, so bring them with you if you can. 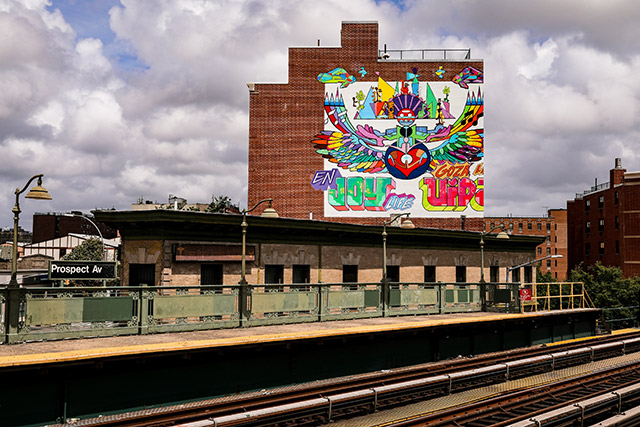 Another city project to keep in mind is the New York City Mural Arts Project. Now in its third year, the project works with community mental health organizations focused on destigmatizing mental illness to produce three murals each fiscal year. They take pitches for ideas, and anyone can participate in design events or community paint days.

Finally, who will do the painting? Generally speaking, you need a crew. And if the process was a community-driven one, recruiting volunteers should be the easy part. If there is scaffolding involved, you need people trained for that, Miles said.

Groundswell focuses on building up young artists through youth-led projects. They also have days where all members of the community are invited to paint.

“When the community sees young people joining together to create something of great beauty, there is a really synergistic transformation as part of the artmaking process,” Jolicoeur said. “And then you tend to have a lot of goodwill about the final product.” 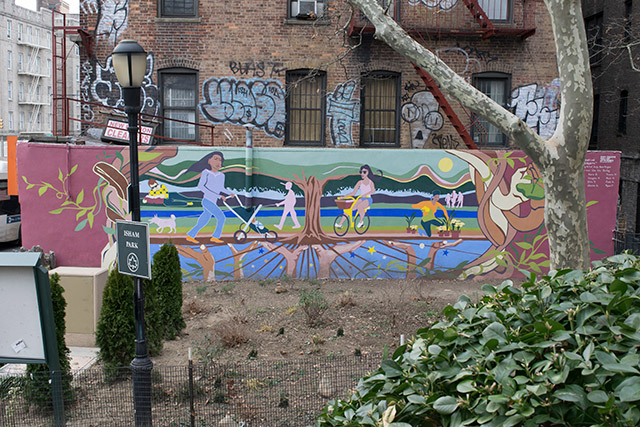 She noted that the steps needed to bring a project to fruition don’t always happen in a straight line. The project may not be fully funded before a design process begins. Or getting permission to use a specific wall may be tricky at times, especially if jurisdiction over a space involves both city and state agencies. (It happens!)

“I wish I could tell you that it always goes smoothly from Point A to Point B to Point C,” Jolicoeur said.

But the point, she added, is to navigate and persevere.

Here's more on this from WNYC:

New School and part-time faculty union to meet with mediator

After two weeks of canceled classes, the New School and the union representing its part-time faculty will meet with a mediator on Sunday afternoon and again on Monday to work toward an agreement.

By
Tiffany Hanssen
Is the NYPD ready for new role in dealing with people in mental health crisis?
By
Samantha Max
Extra Extra: New York City is one of the worst places to be single, at least WalletHub says
By
Brooks Brunson
What forced hospitalization feels like in New York City, as Mayor Adams pushes for more
By
Caroline Lewis
Get the news New Yorkers need in your inbox