Ask A Reporter: How Can I Become Civically Engaged Without Risking My Immigration Status?

by Arun Venugopal and WNYC Staff

Q: How can I become civically engaged without risking my immigration status?

A: “So it depends on what you mean by status,” said Ravi Ragbir as he reclined on a sofa in the Greenwich Village offices of the New Sanctuary Coalition, where he serves as executive director.

Since his arrest in January after a routine check-in with Immigration and Customs Enforcement, and the subsequent clashes between his supporters and police, Ragbir has become one of the most well-known immigrant activists in America. Originally from Trinidad, he’s still fighting deportation in two federal courts. We figured he’d know as well as anyone how an immigrant can become civically engaged without putting themselves at risk.

“Exactly what is your status?” he asked (our questioner, Lisa, hasn’t revealed more of herself). “If you're undocumented you have to be more concerned.”

If you are undocumented, he said, you need to avoid committing any crimes, or acts of violence, or civil disobedience.

“You shouldn't be fighting with any police,” he said. “Or any law enforcement. But if you're going knocking door to door, handing out flyers, engaging with people, inviting them to vote, registering them, that is perfectly fine.”

That’s exactly the kind of work Silvia Garcia's been doing.

She lives on Long Island and has two kids, a 15-year-old daughter and a 17-year-old son, who's a DACA recipient. Even though she's undocumented herself, she says she's going all out in the midterms, trying to unseat Republican Congressman Peter King by campaigning for his opponent, Liuba Grechen Shirley. She and other immigrants have been going door to door, trying to mobilize support for Shirley. They're also talking to potential candidates for state office. Garcia had some advice for Lisa and other immigrants.

“They need to get involved with organizations like, Make The Road Action,” she said. “They have always taken care of us.”

She also stressed the need to share one's status and situation with the organization, so they can tailor their advice accordingly. Garcia says she's witnessing a groundswell of activism within immigrant communities. Other immigrants confirm that they're willing to speak out, even if they're not documented. 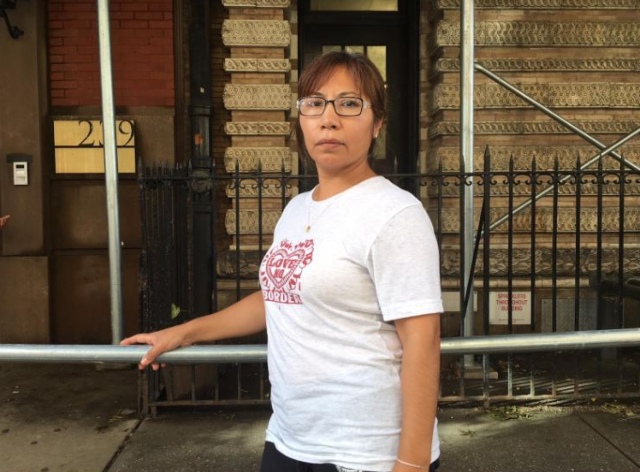 “I am not afraid,” said Judith Sanchez, who also works at New Sanctuary Coalition. “When we don't fear, I believe everything is possible.”

In the event she does get arrested by ICE for her activism, Judith says she has a phone tree. There's an entire network of friends, family, and clergy, all of whom would be activated if she makes a call. And she never carries her Mexican passport in public.

“You cannot be carrying with you official identifications from your country, so you need a municipal I.D. of New York City.”

Carrying municipal I.D. is exactly what immigrant rights groups and city officials recommend. But keep in mind: in two recent cases, immigrants who visited federal military bases in New York were handed over to ICE agents after they showed their municipal I.D.

In addition to creating a phone tree, activists said you really need to designate someone who has access to your medical records, your legal papers, and your bank information. If you have young kids, you also need a friend or relative with access to a notarized form that lets them take care of your children, in your absence.

In Sanchez's case, her kids are now older, and she said this frees her to be politically active in ways she probably wouldn't have when her kids were younger. Still, even with all sorts of precautions, organizers suggest there are significant risks for immigrants who choose to become engaged.

“We've seen ICE target activists,” said Daniel Altschuler of the group Make the Road Action. “And it is certainly an effort to try to chill that type of direct action.”

But Altschuler says Make the Road Action and other immigrant rights groups do their best to work with immigrants and ensure that they don't do anything that could put them in danger. Despite the risks, the level of participation in Get Out the Vote efforts, within New York's immigrant communities, is 'orders of magnitude larger' than it was just a couple years ago, he said.

In large part, this is because immigrants are realizing their legal pathways are disappearing and their best option at this point is political organizing, said LuzHilda Campos, Deportation Defense Program manager for United we Dream.

For more on this story, listen in here:

Arun Venugopal is a reporter who focuses on issues of race and immigration. You can follow him on Twitter at @arunNYC.

What questions do you have about civic participation in New York City that you’d like us to answer? Share them in the prompt below and we'll work to answer as many as we can.

#activism
#ask a reporter
#immigration
#original
Do you know the scoop? Comment below or Send us a Tip