Ask A Native New Yorker's Mom: Must You Bring Your Stroller On The Subway?

This week's question, which is a long one, comes from a subway rider whose question hits a real chord:

Of all the subway etiquette grievances I encounter, few make me more frustrated than bad stroller etiquette. This is not because I hate all babies (though please don't ask me to hold your human bodily fluids maker), but because I assume that if you have made the conscious choice to raise and nurture a defenseless child, you are probably a reasonable person with kindness and compassion in your heart. Yet, I am constantly faced with parents lugging strollers on the subway in ways that seem to expressly indicate that they do not have one ounce of sympathy for their fellow strap-hangers. Although there are many more, I'd like to focus on two main infractions.

Even in uncrowded subway cars, some parents feel the need to park their stroller right in the entranceway of the doors, thus creating a very narrow lane for others to enter and exit the subway car, sometimes making the exit unusable at all. I've seen several parents actively notice that they are creating a Snorlax-like path blockage and do nothing to correct the problem. I've seen strap-hangers (myself included) get stuck on the train because the doors closed before they could exit due to the stroller offender. This feels like a recipe for danger: frazzled, rushed passengers trying to exit en masse and a tiny human child in a thin canvas-and-metal contraption standing in between them and the exit. Shouldn't parents with strollers move to the middle of the train when possible to avoid this potential hazard, or exit the train temporarily to clear the path? Where is the most considerate place to park a stroller on the subway train?

In addition, a stroller takes up SO MUCH more room than the (average) human person does. If you've got two huge, BMW-styled strollers on a crowded train, they are taking up the room of approximately 4-8 people. On some level, isn't it an act of selfishness for a parent to bring a giant stroller onto the train during rush hour, thus ensuing that several less people can ride on that train? Why can't more parents fold up their stroller and hold their child during the train ride? I understand that folding up a stroller is inconvenient, but doesn't that inconvenience pale in comparison to the 2-4 people who cannot get on the train at all due to the amount of space that the stroller is taking up? We ask that people hold large bags and backpacks in their laps or between their legs to create more room for other riders. Why don't we ask for the same courtesy from those pushing strollers?

I know this is a hot-button issue, and I certainly don't want to demonize or shame parents in this city with small children. I realize that being a parent in New York City is a difficult thing, and I sympathize with the struggles they face. But more and more frequently, I have been seeing stroller-pushing parents use their parental status as a license to be an asshole to other subway riders. So please, Native New Yorker, settle this once and for all. What is proper subway stroller etiquette?

The Native New Yorker decided to throw this question to Gothamist co-founder Jen Chung, who is not a Native New Yorker, but is currently raising one. Jen has strong feelings about whether children deserve seats on buses.

I understand your pain—and appreciate your willingness to assume that breeders have some compassion. Let me give you this insight: It's no fun dragging a kid and a stupid stroller through the subway system. If anything, it's like one of the rings of hell for parents, sort of like sleep training (don't ask), but involves trampling on countless others' will to live. Honestly, if there was a better and still inexpensive way to transport a kid from place to place in NYC than the subway, we'd do it.

Which is not to say that all parents are self-aware about how much space they are taking up in the subway. (I'm just going to go with "parents," but people with strollers can include other relatives or caregivers or fancy-free pals who test-drive their friends' kids so they can confirm they definitely do not want to have kids.) I just ask you not to assume that all parents are space hogging assholes, the way you probably wouldn't assume all men are man spreaders. Yes, they are likely offenders, but not all are the same kind of evil. 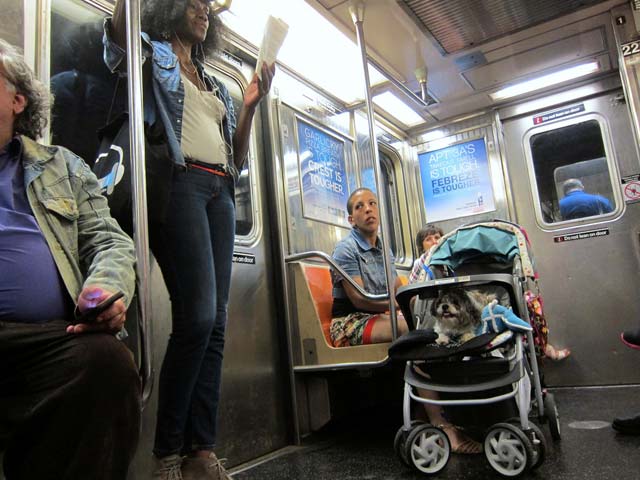 Your concerns are extremely valid, and I'll say that in my five years of dragging a goddamn stroller on the subway, I try to push the stroller to where we will block the least amount of traffic—not to mention repeatedly thank people for their patience or apologize when I inevitably roll the stroller over their feet. And I think most parents generally try to do this. If not, then this is a great opportunity for the next round of MTA subway etiquette posters!

However, it can be very difficult to move the stroller to the middle of the train car if you're on an IRT (1, 2, 3, 4, 5 or 6) train car, which is much narrower than the BMT/IND train car. Clearly, it's best to enter the train car near the one of the ends, so you can hopefully score a little nook next to the conductor's compartment to stash the stroller. (The MTA also recommends, "It's better if you board in the center of the train. The conductor is usually there, making it easier to get attention in case of problem.") But that isn't always possible, so like the person with suitcases or a bicycle who happens to be standing in front of the subway doors, the responsibility is on the parent with stroller to temporarily step off the train for the sake of everyone's sanity.

Folding a stroller is not necessarily the easiest solution, especially if you're traveling alone with a squirmy child, because then you need lap room for the kid and then how are you going to hold onto the stroller? (I speak from experience of folding up a stroller and carrying an 18-month-old while STANDING on a M72 bus because no one wanted to give me their seat; feel free to ask me more about this!)

That said, there are dickish parents around. Like the breeders who did this:

Using an SUV-style stroller on the subway is a real party foul in my book. Blocking traffic and empty seats are awful things for non-stroller wielding adults to do, and when a parent does it, it makes me unspeakably angry. When I saw this jog stroller on a downtown B (or D?) train, I freaked out. Like, I wondered, "Where is this child's parent?"

I couldn't figure it out. The kid was by herself! Then I stepped further into the subway car, I realized the baby's father was SITTING ACROSS FROM THE STROLLER. And then the mother and grandmother were actually sitting on the other side of the door, on the same side as the dad—NOT SITTING WITH THE STROLLER.

These are the people who give parents a bad name. You should be angry and send us photos so we can blur the children's faces and shame the parents. In this instance, they were tourists, so they were off to walk three-across on a sidewalk and probably stop at the corners somewhere in Midtown.

These are the basic principles of subway stroller etiquette for parents:
1) Consider whether a baby carrier might be a better option first—why bring a stroller if it's not necessary?
2) Use a lightweight, easily maneuverable stroller (in other words, don't bring the Bugaboo because not only does that thing weight about 38 pounds, you will die inside when you realize the elevator isn't working at the subway station.)
3) Move into the train and away from the subway doors. If you are stuck by the subway doors, don't stand in the way when the train is in the station—step out and then back in.
4) Smile and thank people who offer you their seats. These are kind New Yorkers.
5) Ditch the stroller when your kid is old enough to walk. Exercise is great for the little one—just build in an extra 40-60 minutes to your journey, because kids be slow. 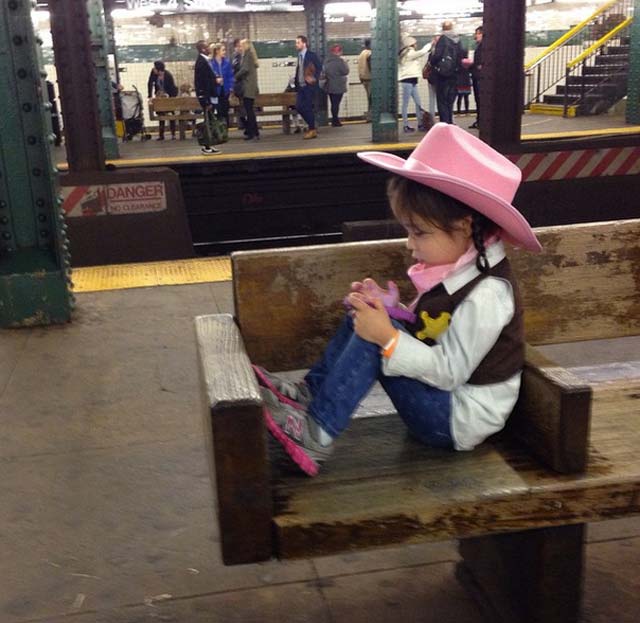 Also, keep in mind that another way for all of us to have better subway rides—more trains, less frequent breakdowns—is if Albany lawmakers stopped trying to hide their private income and started giving a shit about mass transit in NYC, the economic engine of the state.

And if you see someone struggling with a subway stroller, offer to give them a hand. Sure, you might not have kids yourself, but you'll be performing a mitzvah and the stroller-bearer will be very grateful. And you still get to go home and do whatever the hell you want. They don't, ever.