Ask a Native New Yorker: Why Should I Compost?

This week's question comes from a Park Slope resident whose landlord is trying to stop him from composting.

This spring, I was excited to receive a brown bin at my apartment building and start participating in the city's new Organics Collection. I was happily separating my food and paper scraps, shopping for a stink-free kitchen container, and feeling positive about our city's future with 31% less waste in landfills. I saw a huge reduction in the amount of trash our apartment was producing.

But then... our brown bin went missing. I called my old-school, Native New Yorker landlord, who responded with a long rant about how the whole neighborhood now smells and is covered in fruit flies and maggots. He went on to explain that NYC's recycling programs cost the city more money than its worth, and the waste mostly ends up in landfills anyway—in short, we're a mess compared to other cities' waste programs, like San Francisco's.

So, Native New Yorker, how do you see our new pilot program? There are many benefits to organic waste collection, but is it actually working? How can we convince our neighbors that it's worth the small effort to compost responsibly (and use compostable bags if the bin reeks)? I know you'll help me get real with the facts, while balancing the importance of doing right by our environment.

You are right, and your landlord is wrong: it is morally, spiritually, and environmentally important to participate in the Department of Sanitation's Organics Collection pilot program, if it is offered in your neighborhood. However, as your landlord has discovered, participation is voluntary and so far is fairly low: only about 16% of the new brown bins are currently being put out on the curb. So it's up to us to convince your landlord and everyone else that this program is worth trying, and eventually expanding to the rest of the city. 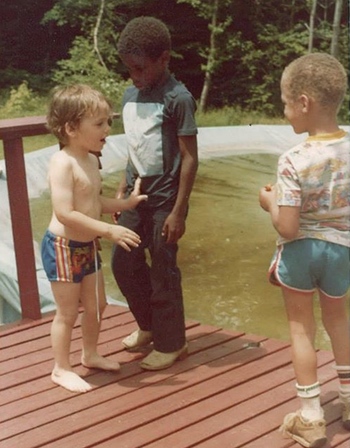 About the pilot program: it's slated to run through July 2015 and is currently only in five areas in four boroughs (plus 300+ schools). You'd know if your neighborhood is participating because the city would have issued those cool brown bins with the latches, which helps keeps rats and rabid raccoons out, as well as smaller "kitchen containers" for collecting food scraps for transporting to the larger bins. The idea is to capture the food, used paper plates, yard debris, and related organic stuff that currently goes straight to the landfills; as our correspondent points out, together that's 31% of our current waste output. That's a lot!

This is not the first time New York has tried to recycle organic waste: on this fascinating DSNY history page, I learned that the first program actually started all the way back in 1895, before World War I brought it to an end in 1918. Decades of incineration and landfilling followed, before the modern recycling program began in 1986, becoming mandatory in 1989. Since 1993 there have been centralized composting programs in each borough, as well as seasonal composting for Christmas trees, but the new pilot dramatically expands on these current efforts.

This is important, because while New Yorkers emit only one-third the carbon emissions of the typical United States citizen (thanks to our extensive use of mass transit and apartment-style living), our recycling rate, in a word, sucks. The standard measure of how much waste we divert to recycling stands at only 15%, less than half the 34.5% rate for the rest of the country.

The city's goal is to increase this diversion rate to 25% by 2020. Some neighborhoods, like Park Slope and the Upper West side, are already achieving this level of recycling, but to get there across the whole city, we're going to need to try harder, and since organics make up such a large portion of the waste stream, expanding our current recycling program to include them is an obvious step towards our goal.

According to the first report on the pilot program, in the test neighborhoods the diversion rate increased by 3 to 8 percentage points (that's about a 25% increase). These are still early days, but for the 16% of bins being used, people are throwing out 16.5 lbs of organic waste on every pickup. That's a lot of food scraps that don't have to be shipped out on a truck or barge to a landfill in Garbagetown, Pennsylvania or wherever we're dumping these days.

So the program works, and it definitely reduces waste: what can we do to get more people to participate? Their objections, as far as I can tell, come in two flavors: the personal and the political. The former can be summarized as "the organic bins really smell, attract rats and bugs, and I'm already spending 10 hours a week breaking down cardboard boxes, sorting glass, plastic and metal. I know the Earth is burning like a match, but who has the time for this shit?" To these arguments, simply point out that the FREE bins have a locking hinge that prevents vermin from getting in, and a combination of biodegradable bags and baking soda will deal with the smell. As for the time, it really doesn't add much: just throw the food into the little bin instead of the garbage, and empty as usual.

The political arguments are more complicated. As your landlord said, some recycling programs do lose money, and it can be "cheaper" to manufacture some types of new items rather than recycling old ones. But almost all the analysis I've found says that large recycling programs almost always break even or make money for the cities they are in (because of "economies of scale"), and if you include all of the "unpriced externalities" of new production (including pollution from the landfills, loss of natural resources, greenhouse emissions, etc), the economic argument favors recycling as much as we can, and certainly the more easily recyclable paper, metal, glass, and plastic that our NYC program already includes.

There's also value in simply setting an example for our kids. Throwing huge amounts of food into landfills while there are people in our city who don't get enough to eat is pathetic, and sends the message that we don't really care what happens to our rapidly incinerating planet. When that last wave of boiling ocean water filled with garbage is about to overtop the city, I want to be able to look my son right in the eyes and say, "Hey, at least we tried!"

Will this particular program work? Who knows! But in this life you get so few chances to do something positive for your fellow human beings and for the planet; please participate if you can, and see if you can get your landlords, friends, and family to do the same.

N.B.: I recently moved back to Park Slope, which is in one of the pilot areas. I confess that until I wrote this piece I wasn't really sure how the brown bins worked, or how often they're collected (twice a week, as it turns out). But I'm going to make a concerted effort starting this week to get all three generations of my family to participate, and I'll let you guys know how that goes.

N.B. 2: For more, Park Slope resident Scott Lynch has been composting, and showed us what it's like.