Ask A Native New Yorker: When Is It OK To Own A Car In NYC?

This week's question comes from a New Yorker who just inherited a car and wonders if it's worth it.

Dear Jake,
My grammy died a few months back. She lived a long and interesting life, but that's not what this letter is about. She had a car that she hardly drove, and because my parents and brother all have cars already, they offered it to me, for free. It's a Subaru Forester, less than 5 years old.
I live in Park Slope, where parking is supposedly a nightmare. But free is free! I work downtown, so I don't need it during the week, but I thought on weekends it could be fun to get out of the city or go to Costco.
Should I take the car?
Sincerely,

Please accept my condolences on your grammy's death. It sounds like you really cared about her, and she really cared about you, and that's why I'm certain that if she was here she'd agree with me when I tell you that taking that car is a horrible idea, and if you do it, in addition to bankrupting you and consuming all your free time, you will most likely be haunted by your grammy's ghost: "Why did you take this Subaru?" she will whisper through the engine. "Don't you realize you don't need a car in the city?"

What the ghost means is that you really need to sit down and consider the costs. Both in dollars—insurance, parking tickets, maintenance, etc.—and in time. Soberly contemplate the hours and hours you will spend either waiting for alternate-side rules to expire twice a week, or else driving around endlessly looking for a spot. 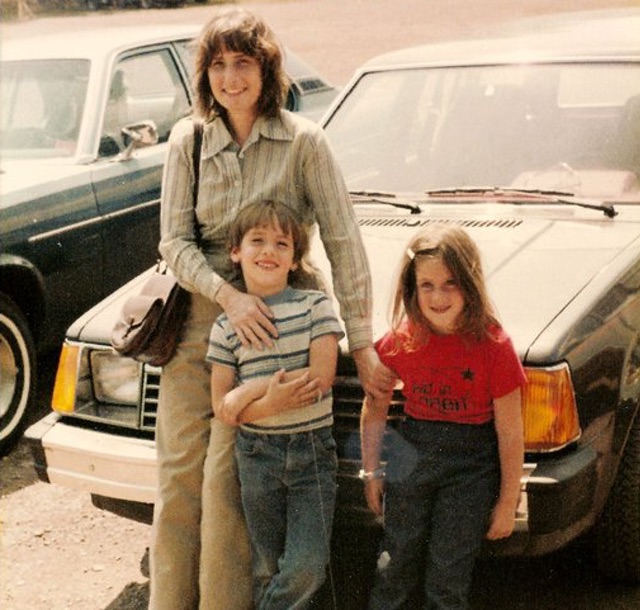 A young Jake Dobkin poses for a photo with his roommates during a road trip. (Courtesy Jake Dobkin Private Collection)

I have experienced this first hand: my parents sometimes ask me to babysit their car while they're out of town, and it always ends up being a terrifying ordeal. Either I wind up battling it out with the forty Park Slope regulars on the block who can afford to stay home for the 3 hours on Mondays and Wednesday mornings and shuffle the car back and forth, or else I end up having to drive the car to work in DUMBO (which takes 30 minutes in stop and go traffic!), pay $30 for a lot space, then drive it back and spend an hour going around and round until someone vacates a spot that will be good for another couple of days.

Stuff like this is why car-owners in New York City inevitably go insane. They either become so consumed by road-rage that they run over a bicyclist or pedestrian that dared to not dive out of the way in time, or else so paranoid and selfish that they try to privatize a piece of public sidewalk for their own use, or, even worse, vote against a bike lane at a community board meeting because it would involve the loss of a few of parking spaces.

Using the subway or bus forces you into close proximity with other New Yorkers, and over time leads to empathy with them, or at least an ability to tolerate their presence. Owning a private car does the opposite: you're in your own little bubble, separate from your fellow man. Increasingly, you forget about your connection to others, and view them as interruptions in your otherwise comfortable commute. Much of the horrible values in Hollywood—selfishness, materialism, worship of the individual—can be explained by how many people there drive to work alone.

But I digress! You have so many alternatives here in New York that obviate the need for a car. Uber, Zipcar, Car2Go, rental cars, yellow taxis, green taxis, livery cabs, dollar vans, pedicabs, not to mention the greatest subway and bus system in the world. With only a very few exceptions that I will explain below, there is absolutely no need for a privately-owned car, and as such, you would be better off taking your grammy's gift, selling it, and putting the money towards a better use, like unlimited MetroCards for the next 10 years.

What are the exceptions that would justify car ownership? I can think of four:

* You live or work in a "transit desert" more than half-mile from the nearest subway station, or your commute would be so laborious (3 transfers? 4?) that no sane person would undertake it.

* You are elderly or disabled, and are not able to make use of the limited options for accessible mass-transit that our city currently offers.

* You have family or some other pressing obligation that requires you to journey outside New York frequently, to a place that is not easily served by our commuter rail or intercity bus systems.

* You are so rich that you have a second home, and that's such a waste of money already that it's like, who really cares about several hundred bucks more a month to get there and back easily?

Beyond these very few and unusual reasons, owning a car is morally repugnant and should be illegal. "Whoa, Jake," you say, "illegal is a strong word!" Is it? Is it really? Cars kill some three hundred innocent people every year right here in New York City, pump God-knows how many tons of poison into the air, and don't pay anywhere near their fair share of the costs for the damage they create.

We still offer free street parking, for crying out loud—that's like the 65% of New Yorkers who don't drive just writing a check to the minority who do, every single month, for the favor of making our city worse.

Cars should be reserved for those who really need them—the people who can't live or work without them—and for everyone else, the law should make it so expensive that it is impractical to own them. And once robot on-demand cars are available, plentiful, and cheap, hopefully in less than ten years, private ownership should be outlawed entirely within the city, with vanishingly few exceptions. This isn't a utopian vision: this is a safe, environmentally friendly, easy-to-get-around version of New York that is just over the horizon, if we want it.

When we get there, and our kids or grandkids look back on our present car culture as unimaginably horrible, you're going to want to be able to tell them you made the right decision here, and were on the side of the people, not on the side of the cars.

N.B.: Did you know Fairway, Costco, Whole Foods, and most other big markets offer delivery that is both fast and affordable, and entirely eliminates the need for a car when shopping for large amounts of groceries? It's true! Cross that off forever from your list of reasons to buy a car.