Ask A Native New Yorker: What Should I Do About My White Neighbor's 'Thug Life' Doormat?

This week's question comes from a New Yorker who can't stand her neighbor's doormat (pictured above). We received this query a couple of months after Gothamist was shut down in November.

I live in Harlem, a more slowly gentrifying part. A white twenty-something woman from Long Island recently moved in across the hall. This morning she put out a new doormat! I don’t know what to do or where to turn. Hoping you can help.

Thank you for the question, and please excuse the lateness of my reply: work has been crazy lately! Congratulations, by the way—you have managed to find the worst example of “gentrifiers acting badly” that I have seen since the Summer Hill bullet-hole fiasco way back in the summer of 2017. That really feels like a long time ago now. It’s funny how quickly time passes when every day is a non-stop news deluge of creeping fascism, perversion, and xenophobia—and that’s just the stuff about the president.

What’s been going on in local news, besides the continuing collapse of local news as a for-profit business model? Well, let’s see; since the last time I wrote an Ask a Native New Yorker column in February 2017, the subway has continued to crumble, Bill de Blasio somehow coasted to another election, the city has seen its usual share of tragedies and mayhem, and yet it hasn’t been all bad. Trump, as I predicted after the election, still hasn’t started a nuclear war, and his regime has been met with powerful protest movements and a level of civic engagement in politics that New York hasn’t seen in decades. Rents in some parts of the city have actually been falling for a few months. (Median rent in Brooklyn is still $2,629.) And the weather is finally getting warmer—just this week they turned on summer!

But some things never change, like gentrifiers still acting like jackasses to their new neighbors. Take this doormat: your new neighbor from Long Island probably just thought it was a cute demonstration of her realness—after all, Tupac did grow up in Harlem. She probably wasn't even alive when his “Thug Life” album came out in 1994; it likely just seeped into her consciousness as an Internet meme, or however young people get their culture these days. What she's failed to consider, obviously, is how other residents of the building might feel about them literally stomping on the legacy of one of the most mourned and respected rappers of all time, or the message it sends when white people appropriate the culture of black people for use as ironic home decor.

This obviously demands a response. Your first instinct may be just to swipe this monstrosity and throw it down the garbage chute, but tasteless doormats like this cost only $16.99, and they’ll probably just assume it was stolen and get a new one, or something even worse (such things exist). No, people this clueless are a danger to themselves and to the fabric of our communities, and as such, you’re going to have to educate them face-to-face. You should march over there, knock on the door, and introduce yourself as their new floormate. After a normal exchange of pleasantries, politely but firmly explain why their doormat is racist and offensive, and why they don’t want the kind of reputation they’re going to get if they continue to display it. My guess is it’ll be gone tomorrow. 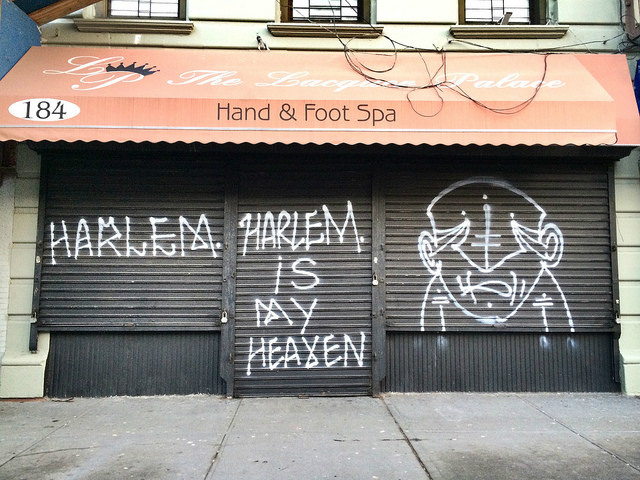 It is likely that your new neighbors are just ignorant, but not evil, and once they are educated by a wiser, long-term New York resident, they might be capable of contributing something to the neighborhood. As we’ve discussed many times before, gentrification is not all bad—the presence of these newcomers creates problems, like forcing some longtime residents and businesses out through rising rents, but also opportunities: an influx of money into local stores, more attention from politicians, safer streets, and more diverse schools. With your help, your new neighbor might be able to make a positive addition to the community, or at least embarrass herself less. Helping new arrivals be less clueless is a mitzvah, and an easy way to make the city a better place. Consider it!

But I didn’t write today to just discuss rap music, doormats, and gentrification. What I really wanted to discuss is forgiveness. You see, in situations like these, where someone has made a boneheaded or inconsiderate move, you’ve got two choices. You could vow vendetta forever—shun your new neighbors in the hallways, let the door slam in their face—but do you really want to let your life be poisoned by that kind of hatred? In the short term it’s probably satisfying, but in the long term, as you act this way over and over, this approach to life is going to lead to a lot of unnecessary conflict and regrets.

The other path is more difficult; it requires you to put yourself in the other person’s shoes, figure out why they made the choice they did, and whether, having learned they were wrong, whether they’d do it again. Most of us humans are complex. We bumble through life, doing the best we can, occasionally make a wrong turn, and then try to get back on the right path. When you see someone in that kind of situation, try to help them out, because one day you might find yourself in their place.

N.B.: I understand you may have some questions or opinions about the events of the last 12 months. Feel free to share them in the comments. I may not be able to respond to each one, but I will try to answer what I can. And if you have any ideas or suggestions for future Ask a Native New Yorker columns, please send them to tips@gothamist.com. I’d like to bring the column back as a regular feature on the new WNYC-owned Gothamist.

#advice
#ask a native new yorker
#doormats
#gentrification
#harlem
#original
Do you know the scoop? Comment below or Send us a Tip