Ask a Native New Yorker: What Should I Do About My Roommate's Tinder Sex Addiction?

This week's question comes from a New Yorker who is trying to navigate the murky waters of roommate sexual activity.

I was lucky in finding two pretty decent roommates on Craigslist when I moved here a little over a year ago. We get along fine, but I have an issue with many of the situations that arise when a roommate is dating (especially in that initial goofy-love phase of dating): having some stranger she found on Tinder in my apartment all the time, that stranger trying to bond with me in thinly-veiled attempts to gain ground with her, having to wait on that stranger to shower in the morning, and, of course, audible sex.

I can deal with all that, though. I'd like you to help me with roommate PDA etiquette.

Where do you draw the line? If you walk into your shared living room and your roommate and met-him-on-Tinder-a-week-ago guy are cuddling on your couch, dominating use of the room, are you upset? If you're cooking dinner and they're in the shower together, are you upset? If he's in your apartment 4-5 nights a week, 3 weeks into dating, are you OK with that? OR IS IT NONE OF MY BUSINESS? 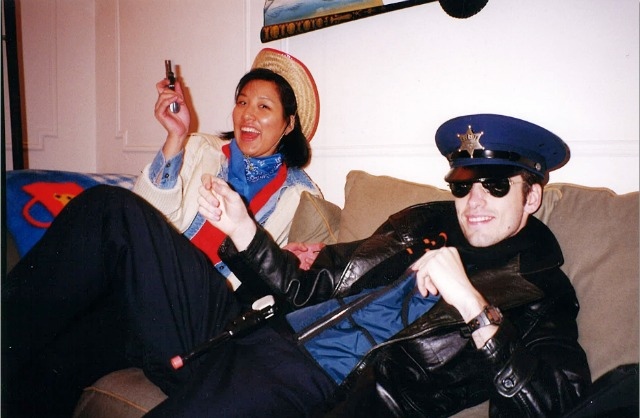 You are the victim of two pernicious trends: the oppressive rise of New York City housing costs, and the development of mobile dating apps that have made getting laid as easy as ordering Thai food from Seamless. We have discussed the lack of affordable housing many times here, so we'll just note that in a city with greater housing supply and more sensible regulation, you'd either be living alone or in a larger apartment‚ instead of separated by 2" of drywall from your roommates' frenzied humping.

So let's discuss Tinder. For the uninitiated, the app presents you with a stream of pictures of potential hookups culled from friends-of-friends on Facebook and organized by distance. You swipe right to signal your interest in someone, left to ignore. If they also express interest in you (the so-called "double opt in"), you are kicked over to a messaging function where you can introduce yourself and set up your assignation. Over the last year, the app has moved from a novelty popular among party kids in Los Angeles to a worldwide phenomenon. It is to previous dating technology as crack rock is to regular cocaine.

When evaluating the moral value of a new technology, we must examine both the purpose of the technology and the intention with which it is used. The history of Tinder indicates that it was built by a couple of USC frat boy rich kids for the purpose of securing a steady stream of casual sex after college. Based on my observations of single friends and people using the app at bars, this is also the intention with which it continues to be used. There's nothing wrong with that! New York's sexual morality descends from its history as a Dutch colony, and anyone who's been to Amsterdam knows that the Dutch don't judge when it comes to carnal relations.

Problems only creep up if new users are unaware of the purpose built into the app, and attempt to use it for something for which it is not intended, like finding a long-term relationship, or not getting herpes.

But back to your roommate. It sounds like she's using Tinder for the reason it was built: finding other people who are down-to-fuck nearby. This has now become your problem because you failed to include rules for mobile-mediated sex sessions in the basic roommating contract that you guys both signed when you moved in. You know, the one that covers things like not leaving dishes in the sink, splitting cable and cleaning costs, and not blasting "Let It Go" over-and-over after 10 p.m. Just as good fences make good neighbors out on the Great Plains, a mutually agreed on set of ground-rules is critical for maintaining roommate happiness in our city's small apartments.

Along these lines, I'd suggest adding a few new clauses to this contract to address Tinder-related conflict. For instance, no more than one night of stranger sex per week (with an exception on weeks with three day weekends), no bringing home strangers on first dates unless you have at least 5 shared Facebook friends, keep the strange out of the common areas, replace consumed food, alternate apartments on each successive hook-up, and always think of others and how much your make-out noises disgust them and how they're definitely writing a Tumblr about it.

Another idea worth considering: you'll probably feel better about things if you start having more sex yourself, because nothing rankles more than listening to others have sex while you yourself are blue-balled. Obviously do not attempt to invite yourself into a three-way with your roommates; that will definitely lead to trouble. Instead, log on to Tinder yourself, or perhaps one of the older dating tools that focus less on physical objectification of others, and more on forming lasting connections. Is OKCupid still popular? Or, I don't know‚ maybe get a white noise machine and lock yourself in your room while your roommate does his or her thing: there is so much great programming on Netflix right now.

N.B.: If all else fails, you can always try to sabotage your roommate's hookups. Try tacking a receipt for bed bug extermination services to the fridge. Or if you encounter the two lovebirds stinking up the common areas with their affection musk, that's your cue to languidly clip your toenails on the couch. And if you hear them having sex, drown out their ecstasy with a sustained bout of anguished, uncontrollable sobbing.

#apartment shares
#ask a native new yorker
#roommates
#sex
#original
Do you know the scoop? Comment below or Send us a Tip