Ask A Native New Yorker: What Is The Correct Way To Walk?

This week's question comes from a Park Slope resident who feels weird whenever he gets stuck behind some waddling clods blocking the whole damn sidewalk.

I walk pretty fast and often find myself getting stuck on a narrow sidewalk behind someone who's walking very slow. Especially on 7th Ave in South Slope where I live. Any attempt at passing requires squeezing by on either side and risking unwanted physical contact. So I end up slowing my pace and walking a few feet behind Slow Walker waiting to get to a point where the sidewalk widens and I can safely pass.

It's in these times I feel like a stalker. All my attention is focused on Slow Walker. Where are they going? Why don't they want to get there faster? Why can't they walk in a predictable straight line? And then, as if Slow Walker can feel this tension, or maybe I was asking those questions out loud, they sneak a quick glance over their shoulder. And there I am, an awkward 30-something who snuck out of Hogwarts for the night to go to the Weezer show. Slow Walker seems relieved, the sidewalk widens, and I slip past.

So am I stalker? Is there any way for Slow Walker and me to comfortably share the sidewalk? Do I just have to chill?

I can tell you've been here for awhile, because you're both a fast walker and extremely paranoid, which are both traits that New Yorkers develop over time. All the tourists are enjoying their thoughtful, meandering strolls in the crisp Autumn air, while you're running wildly down the street with a spilling cup of coffee in one hand, your dress shirt half-tucked in, and a crazed internal monologue going about these slow walkers and why they walk so slow and what they must think of you. Completely normal!

As you've noted, in New York we walk quickly and on the right, gracefully avoiding obstacles like open basement grates, dog poop, and that unholy trinity of young families, tourists, and the elderly. When evasion is impossible, we tailgate like a long-haul trucker hopped up on benzedrine until the obstruction moves. And if this doesn't work, things sometimes get a little ugly—the loud "excuse me!" (or worse, "excuse you!"), the not-so-friendly shoulder-bump. This is one of the main reasons people from out-of-town think that we're assholes... it's because we act like assholes. 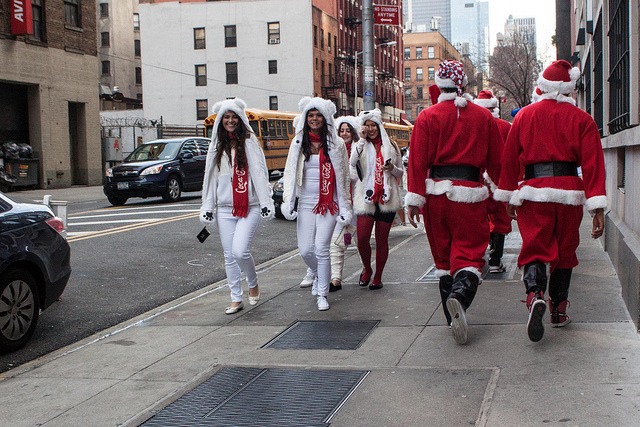 Consider! The couple pushing the double-stroller on that narrow street in Park Slope, the elderly gentleman hobbling along to the senior center, the lost tourist: as they are now, you soon may be. Kids happen to a lot of people, getting old happens to everyone. And who among us has never gotten lost in the West Village? How can West 4th Street intersect West 12th Street? That don't make no sense at all!

When I was a young man I walked fast and resented the people who got in my way. Couldn't they see that I had somewhere extremely important to be? Now that I am old, I realize two things. First: no one is thinking about any one else, because humans are an extremely self-involved species.

Second: it is very difficult to push a stroller, march a toddler, and keep yourself from screaming obscenities, let alone progress along the street at a normal pace. It looks simple but it's not: kids wriggle out of their restraints, drop their supposedly beloved stuffed-animals in crosswalks, and sometimes fly right out on to the pavement when you hit a bump. It's like transporting nitroglycerin on a bumpy mountain road with everyone in the truck shouting at you in a different guttural language you only barely comprehend. 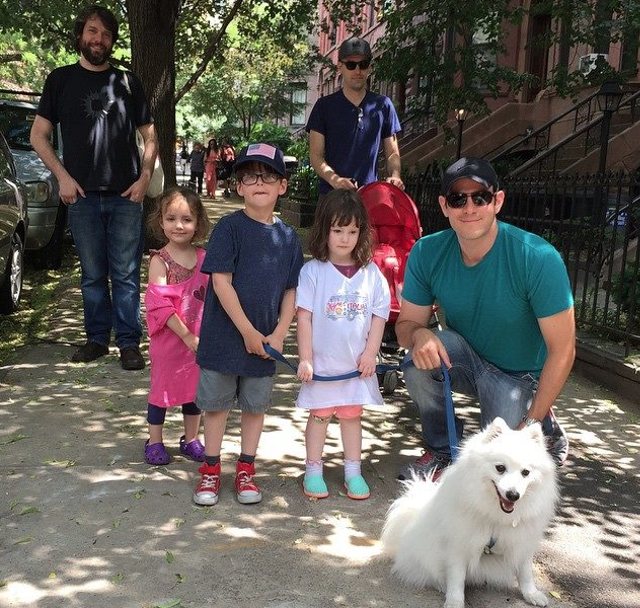 A stroller-bound Jake Dobkin blocks the sidewalk as his roommates pose for a photo. (Courtesy Jake Dobkin Private Collection)

Have some sympathy. Meditate on the unnecessary pain that an egotistical mindset imposes, and how it can poison even a very zen activity like walking. Think about how you've completely missed the real enemy here, which is the oppressive capitalism which forces you to run ever faster just to barely stay in the same place. Ask yourself, do you really want to live in a society where you can't be ten minutes late getting to work?

Or, I don't know, have you ever considered just jaywalking over to the empty sidewalk across the street?

N.B. Much of this discussion also applies to subway stairs and escalators. Elevators will probably require a separate essay, but if anything happens to me before I have time to write it, remember: LAST IN, FIRST OUT.

#ask a native new yorker
#pedestrians
#sidewalks
#walking
#original
Do you know the scoop? Comment below or Send us a Tip