Ask A Native New Yorker: What Do I Do When I See A Subway Masturbator?

This week's question is from a woman who wonders what to do in an unfortunate situation:

I've lived in New York for 6 years and have always heard about elusive masturbators on the subway from friends. I had been thankfully spared from such an incident until yesterday when, on my morning commute on the A train, the man sitting across from me began to furiously shake his hand in his pants. I was obviously disgusted, and thought about taking his picture to send to Gothamist, but didn't even want to look in his general direction, much less have a picture of him on my phone.

Is there an MTA protocol for this? Should I have taken a picture and sent it to authorities/Gothamist? Coincidentally, more women than men entered the subway car at each stop, each of them disgusted. One poor older woman unknowingly sat next to him and when she realized what was happening, sat stone-faced for two stops. Despite all this, no one took pictures or said anything to him probably because "hey, it's New York" and people just ignore things.

Jake decided to throw this question to Gothamist co-founder Jen Chung, who is not a Native New Yorker but has seen too much subway dong.

Seeing someone's penis while riding the subway is not a "Hey, it's New York" thing—it's a completely messed up and disgusting technique that sickos use to intimidate you.

The MTA and NYPD want you to report these incidents and, ideally, catch these perps. Otherwise, there's the risk of the bystander effect where no one does anything and the crimes keep happening. When speaking with us about a different subway incident, one NYPD Transit Bureau officer said the public should contact the police—whether it's flagging down an officer at the station, at a precinct or by calling 911. The officer told us that witnesses "can't rely on one person to make the report—if 50 people are calling 911, then we'll have better descriptions" of suspects and then police can construct what may have happened more easily.

Flashed dicks, subway grinding, masturbating—they are all sexual misconduct. If more people speak up and report these incidents, police officers will have to take them more seriously. A few years ago, I told a police officer about a man who was rubbing himself against my back on a packed 2 train (I wasn't sure that it was actually happening until I saw the faces of two other women near me) but he said, "Well, he didn't really touch you. We can't do anything about that."

It helps the authorities tremendously if there's supporting evidence—a photo, a video, another witness—so they can send out information to the media and, hopefully, arrest the suspect. So I'd say you should definitely take any photographs or video you can as long as you don't put yourself in harm's way. You can also try to enlist your fellow subway riders in the effort:

That means it'll probably be easier to take the photo/video on a crowded subway, while you might need to be more discreet on a less-populated one. Always keep your safety in mind. One of Native New Yorker Jake Dobkin's mottos is "Don't be a coward, but don't get yourself killed." 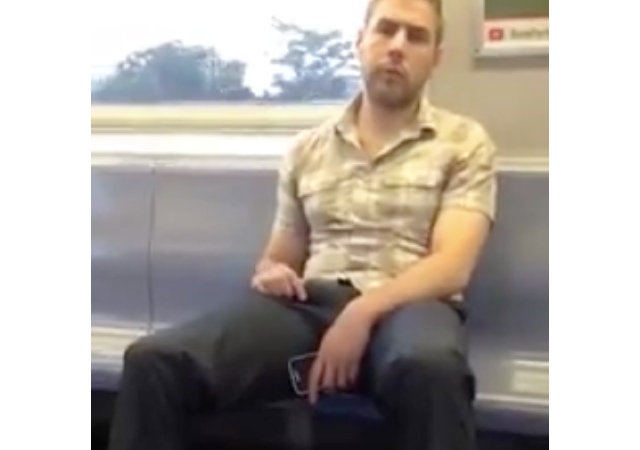 The victim told us that even though she feels violated and uncomfortable riding the subway now, "By shooting the video and [Gothamist] posting it...[the police] can't ignore it and brush it off as incidental. They can't say 'it wasn't as bad as you think, because they see how bad it was."

Keep in mind, if you do file a report with the police, they may try to give you the run-around because there's this annoying thing: If the actual incident occurred in one precinct, but you report it at another precinct, an officer may tell you it's not their problem. Do NOT let the cops try to sweep this under the carpet—you can file the incident on the MTA's website and detectives will contact you. And you can always send us the information—email us at tips@gothamist.com—and we'll do our best to expose these creeps.

#ask a native new yorker
#crime
#MTA
#nypd
#subway masturbator
#subway pervert
#original
Do you know the scoop? Comment below or Send us a Tip