Ask A Native New Yorker: What Can I Do About Scofflaw E-Cig Vapers?

This week's question comes from a New Yorker who's aggravated by the flagrant e-cigarette smokers in their midst.

First, let me start by saying that I get the whole, "New York used to be so much cooler when we could all smoke inside..." argument. It was cooler, I get it. Rock stars are cooler when they are on lots of drugs, but that doesn't mean its a good idea. I for one am not the kind of person who thinks that deadly habits are worth the potential uptick in one's hipness—especially not when they're also dangerous to innocent bystanders.

So, what is one to do about the fact that people seem to be completely disregarding the fact that it is also illegal to smoke those damn e-cigarettes indoors. Why is this law not enforced? Yesterday afternoon, I was enjoying a quiet beer (a drug that I imbibe which does no harm to those sitting around me) in a bar with some friends. Suddenly, a group of people next to us started puffing away on their newfangled smoke machines—while their friends who were still using the paper kind went outdoors to smoke like respectful human beings.

I was so annoyed by their disregard to their fellow bar-goers that I had to move to the other room for fear that I'd smack that little aluminum cancer boxes right to the ground.

How is this law not being enforced and what is one to do when people disregard it?

We let our resident e-cigarette "expert" who hails from Virginia, where Philip Morris literally built a giant totem pole to honor their cigarette brands on the side of the highway, field this query.

The part of me who spent 4th grade snow days distracting the gas station attendant while my friends swiped Benson & Hedges or Capris or whatever lesser brand they relegated next to the ICEE machine, who remembers the gauzy hum of a room full of smoke and laughter and tennis shoes on couch cushions, who still feels the ghostly embrace of a half-full Marlboro soft pack against his right thigh—untouchable, immortal me has a message and a sneer for you: light(en) up.

You don't see Ralph Nader getting all worked up over nicotine fog juice, so why should you?

Fortunately for everyone, that version of myself doesn't come around much anymore, probably because he owes me money.

He's mostly been supplanted by someone who eats a lot of raw kale and screams at the television and shakes his head whenever he pedals past two souls standing outside the NoHo Vape-O-Drome, sucking elderberry CS from steampunk kazoos, comparing the Deftones lyrics tattooed on their calfs.

Still a jerk, this guy, but less tolerant of corporate menaces to public health and their Libertarian-infused diet nooses.

Yet he would still urge caution before shooing or scolding indoor vapers.

Saying that your alcohol consumption is harmless to those around you is a bit like saying you rock a fair-trade blood diamond. Booze kills 1 in 10 Americans, and we live in the most bar-saturated city in the United States—don't we bear some responsibility for all this death?

Secondhand smoke is demonstrably dangerous, so we banished it from almost every conceivable public space. You could say that regulating alcohol in a similar fashion is unfair because one can responsibly enjoy it, but it's tough to argue prudence when you're the leading cause of premature death in a country of 318 million, plus the hundreds of billions of dollars of strain that sweet, sweet sleepy juice puts on our already inefficient healthcare system.

In other words, we have decided that alcohol is worth all this risk and gore. Combustible tubes of nicotine potpourri sprayed with cartoonishly awful carcinogens are not. 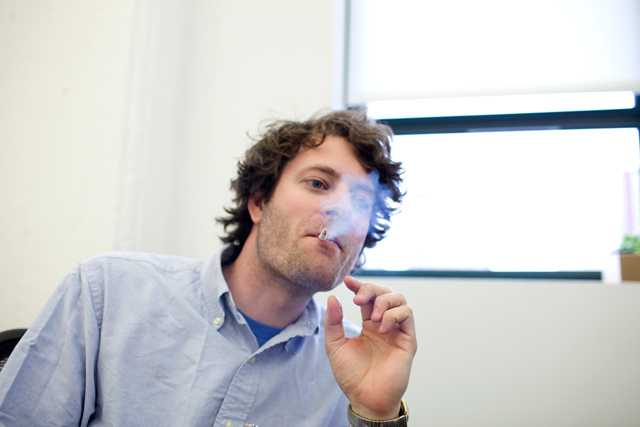 The science on e-cigs is still extremely fluid. Most of them heat a combination of water, nicotine, flavoring, and propylene glycol, which is stuff that's found in fog juice and scores of other household products and even some foods.

Is it harmful to repeatedly inhale a bunch of man-made chemicals into your lungs? Probably. (Amazingly, there are naturally-occurring chemicals that you may burn and inhale without significantly affecting your mortality.) How harmful?

A study released this year suggested that those big vape machines (favored by the most zealous of capital V Vapers) with refillable tanks can heat up the propylene glycol to a temperature that produces formaldehyde. Skeptics argued that those temperatures were unrealistic outside the laboratory, and there was nothing to say about second-hand effects.

Most of the doctors I spoke to think that e-cigarettes aren't good for you, but are almost certainly better than smoking combustable cigarettes. This is important, because quitting nicotine is extremely difficult—not heroin difficult, but harder than cutting back coffee!

As an empathetic New Yorker, it is important to look upon the human being who is vaping three stools down and think, While I do not appreciate your flagrant disrespect for city laws, I will bravely countenance a few weird smells so that you may one day realize how dumb it is to suck a "robot dick" for an elevated heartbeat.

To your complaint about the lack of enforcement: in a city where affordable housing is scarce, where cherished public institutions are withering on the vine, where tens of thousands of people sleep in the cold or in decrepit shelters run by evil men, should we really be asking the City's Department of Health to hire more inspectors to walk into bars and restaurants to scold adults for an activity that is at worst a nebulous threat to their health? I'd rather have some countdown clocks.

You could always tattle to the bartender, assuming they agree with your stance on e-cigs (this is a risky strategy—bartenders are people too, and some of them smoke things). But if there's one thing worse than a vaper, it's a narc.

#ask a native new yorker
#e-cigs
#vaping
#original
Do you know the scoop? Comment below or Send us a Tip