Ask A Native New Yorker: Should We Build Condos In Brooklyn Bridge Park?

This week's question comes from a transplant who hates the new condos going up in Brooklyn Bridge Park.

I am a long-time NYC transplant from the wild forests of the North (i.e. near Danbury, Connecticut). When the city gets me down I seek solace in the parks, whose trees remind me of my native habitat. Recently I've been living near Brooklyn Bridge Park. It's a great park: really nice lawns and trees near Pier 1, a nice long path by the water, ball courts by Pier 2, playgrounds by Pier 6, and even a beach.

But recently the construction of condos behind Pier 1 seems to have hit a tipping point—it's like they're adding a new level each week. And I've been following the news about the two condos planned near Pier 6. While I understand the latter will have affordable housing, and some token amenities for the public on the ground floor, it seems wrong to place these developments IN A PARK. There's such little open space in the city, can't we let parkland be a little sacred?

You are wise to seek comfort in our city's many beautiful parks. Even grizzled natives like me sometimes feel oppressed by the crush of the rush hour throngs, the clanging of ambulance sirens, and the intense summer garbage smell, and need a break. Thoreau wrote, "there can be no very black melancholy to him who lives in the midst of Nature and has his senses still." This is very true, even when Nature is just a bench in a park right under the expressway!

Most assaults on our precious park space should be repelled with resolute intensity. If some billionaire Russian kleptocrat tried to build an 80 story condo in the middle of the Great Meadow in Central Park, the whole city would unite in opposition. Even when the 80 story condo is on 57th Street, there's still a good argument that we should oppose it, because it'll block light in the southern part of the park, by the playgrounds, ball fields, and pond. A similar protest is going on over a condo on Flatbush Avenue, which Prospect-Lefferts Gardens residents argue will block light on the east side of Prospect Park.

The Pierhouse Condos currently going up by Old Fulton Street in Brooklyn Bridge Park were similarly protested before the Great Recession. Neighborhood groups argued that the park shouldn't depend on condo sales and taxes to support itself, and that a luxury building with units priced "from the two millions" is an odious affront to the egalitarian, democratic spirit that our city parks are supposed to embody.

There is something to this! However, that deal is done—the neighborhood did manage to limit the height of the south Pierhouse building to four stories, where it will block less of the view from the Promenade. If you're still mad about it, think about it this way: when Hurricane Sandy II arrives, these condo buyers will be performing a valuable service to their neighbors further up the hill, absorbing many millions of gallons of fetid East River water in their basement before it can poison the rest of us.

The remaining two condos in the 2006 Brooklyn Bridge Park plan are scheduled to go up on parcels of land just west of Pier 6, south of the massive One Brooklyn Bridge Park condo (where a penthouse is currently for sale for $32MM). Originally these were planned as more luxury developments, but after Mayor de Blasio was elected, his administration intervened and reserved 30% of the buildings for affordable housing. Renderings for the different proposals were released a couple of weeks back, against the backdrop of an increasingly acrimonious battle by several groups to stop the development. 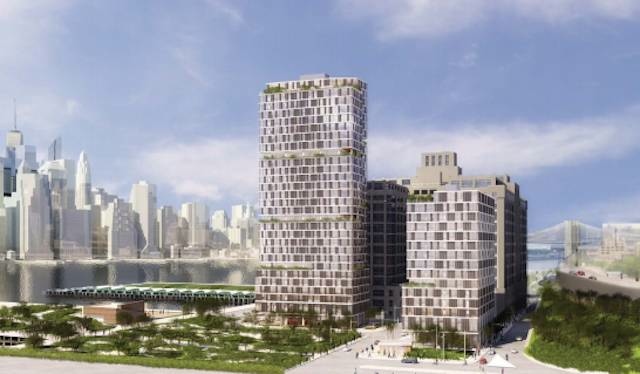 A rendering shows designs under consideration for condos by Brooklyn Bridge Park Pier 6.

In a dense, opinionated city like ours, it's no surprise that a project like this faces opposition. No one likes dealing with years of construction noise, or having their view blocked by a new building. Sometimes, as with the fight against the Upper East Side garbage transfer station, the NIMBYs do make a sympathetic case; who among us wants dozens of garbage trucks belching fumes driving down their block every single day? In this case, however, the Pier 6 NIMBYs have a much weaker case, and have given some very unsympathetic quotes to the local press. Let's explore!

The case against the condos rests on two dubious contentions. The first is that the project will create "overcrowding," "lower property values," "and burden school capacity," which is standard NIMBY code for "we don't want more poor people around here." The second is a technical argument that the 2006 park plan said the condos had to be built to provide the maximum financial support for the park, and by reducing the amount of luxury real estate in the towers, the city has violated that agreement. A judge will hear arguments on this in September, but groups as diverse as the Brooklyn Heights Association, The Brooklyn Bridge Park Corporation, and the New York Times and AMNY editorial teams have found it overly legalistic and less-than-compelling.

Then there are the NIMBYs themselves, who have offered comments like "Affordable housing is a noble and fine thing. But a park that has to pay for itself is not supposed to pay for the ills of the city" and "we would probably never have made the purchase had we known there would be 100% subsidized housing immediately next door." Leading the charge is one Ms. Schomp, an outspoken opponent of the development who is married to a hedge fund executive, resides in a $7.6MM townhouse on the next block, and "wants her view of the water on her frequent runs preserved". This is not exactly the sort of group who should elicit strong compassion from the rest of us. 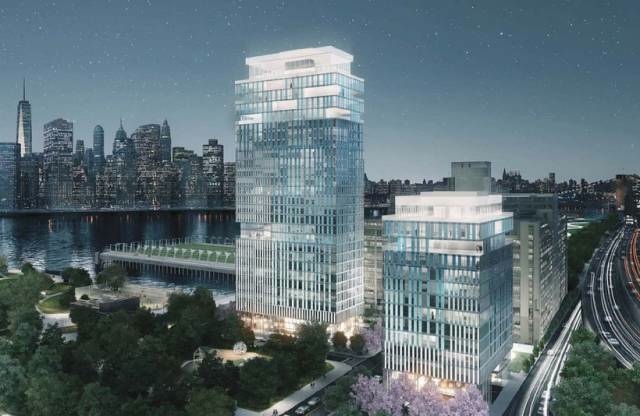 Another rendering shows designs under consideration for condos by Brooklyn Bridge Park Pier 6.

The fact is that the new buildings will go up on land that is unimportant to the park plan (wedged hard up against the BQE and currently occupied by some bushes and a dog run). The condos were already approved in the 2006 plan, and if 30% of the 430 apartments went to affordable housing, that'd be 129 families who would be able to stay in New York without crushing housing costs. Though these apartments would not go to the neediest families (as they are allocated "to those with income of $67,100 to $138,440"), they'd still preserve a slice of middle class residency in what is quickly becoming an oligarchic part of Brooklyn. The neighbors most likely to be inconvenienced at One Brooklyn Bridge Park bought their condos knowing these new buildings would be built, so their distress cries need to be taken with a healthy dose of skepticism now.

As we've already discussed, New York currently faces an unprecedented housing crisis. Building tall buildings with mandatory inclusive zoning is one of the few shots we have of creating more affordable housing supply, and if it means some of those buildings have to go at the edge of parks, we all need to grin and bear it for the greater good. In NYC, a liberal is just a conservative whose block hasn't been jackhammered yet, but the true measure of your humanism is your willingness to sacrifice a little for others. In this case, that means build, baby, build.

N.B.: A more difficult case is presented when the condo going up will contain only luxury housing. Some argue that increasing supply for the rich relieves shortage pressure in more affordable parts of the housing market, but if that's true, New York hasn't seen much evidence of it. In this case, however, we are dealing with an affordable development, and that changes the moral calculus.

#affordable housing
#Ask A Native New York
#brooklyn bridge park
#development
#gentrification
#original
Do you know the scoop? Comment below or Send us a Tip