Ask A Native New Yorker: Should The Stuy Test Be Eliminated?

This week's question is from a Stuyvesant High School alumnus concerned about proposed changes to its admissions process.

You seen this bullshit about the UFT and some liberal pols trying to get the Stuy test replaced with some kind of namby-pamby "portfolio review" or something like Middle School grade point average and recommendations? You know as soon as they do that, the school is done! Everybody with connections to the Board of Ed or their local politician will use their juice to get in, and the real smart kids will get shut out. Can you use your enormous power as the author of the Ask a Native New Yorker column to fight this atrocity?

As a fellow graduate of Stuyvesant, I too was outraged when I heard that in the future, someone might be able to get into that school without suffering through a year of 7th grade test prep, an excruciating 3-hour SAT style exam, and then months of waiting to hear whether you got to go to Stuy or Bronx Science or Brooklyn Tech or were going to spend the next 4 years getting beat up on the bus riding out to Murrow. Just kidding; I knew I was going to get beat up on public transport no matter where I went to school!

You know what else is outrageous? That only seven African-American kids and twenty-one Latinos managed to get into Stuyvesant this year, out of 952 kids. According to my Stuyvesant-honed math skills, that's only 2.8%. The New York City public school system is about 40% Black and Latino! So no matter where you went to high school, you have to admit that the current test system is producing a striking lack of ethnic diversity at Stuyvesant. The problem is similar at the other 8 specialized schools: for instance, the incoming freshman class at Bronx Science is only 7% Black and Latino, and Brooklyn Tech is 14%.

When I polled some Stuy graduate friends for reactions to these numbers, three responses were popular. First: "What are you talking about? Stuyvesant is 71% Asian—don't we count as a minority?" Second: "Sure, the school is racially homogenous, but it's economically diverse—show me another school where so many kids are from first generation immigrant families." Third: "Who cares? Does every school have to exactly reflect the gender and ethnic demographics of the city? What is this, Berkeley? Soviet Russia?" 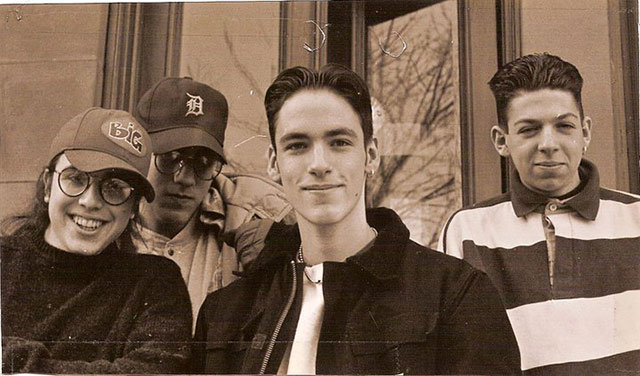 Four members of the Stuyvesant Class of 1994. (Private Collection of Jake Dobkin)

That last opinion seems to coincide with my friends who read the New York Post; a typical recent piece in that paper defending the test was entitled "Don't destroy New York City's best high schools," and argued that "desegregating middle schools, maintaining high standards, challenging curricula and increasing support for our low-performing middle schools" were better ways to create diversity at the Specialized Schools.

Now, like I said, as a graduate of one of these schools, I'm biased towards keeping a tradition that I suffered through and that I benefitted from: that's just human nature. So maybe it's not surprising that I actually agree with you and with the New York Post here: I think the city should retain the test, because it's the simplest and least biased way of judging a large group of middle schoolers on future performance at test-driven, shark-tank style high schools like Stuyvesant. Any other method, like portfolio reviews, looking at past grades, racial quotas, geographic quotas by borough, etc, will just be biased in another way, open to gaming, and worse, will actually lead to kids getting into these schools that are going to be unhappy there.

Let me expand on this last point! I had the unique experience of not just attending Stuyvesant, but teaching chemistry there for a year after college. Of the first experience, the main thing I remember is how grueling it was: the three hours of homework every night, the constant stress of exams, the incredible focus on grades, etc. Though I have been through a variety of stressful school programs and jobs in my time since graduating, whenever I have a stress nightmare, it's always set at Stuyvesant, being unprepared for a Calculus test.

When I was a teacher I saw this stress from the other side: you have no idea how many ways smart kids have to cheat on tests. For instance, we had this machine that would scramble the order of questions between class sections, and even the order of multiple choice answers on the tests, and these kids found ways to beat that. Once I caught them passing answers on a stoichiometry quiz, and I demanded to know who started it so I could give them a zero. One after another, every kid in the class stood up and said "it was me!", because they knew I couldn't fail all of them. That gives you a feel for the kind of place it was.

Now imagine you drop the test and throw some nice, well-rounded kids into this gladiator pit. They are going to have a very bad time. I saw that close up with some of my friends when we were students; these were very bright kids, but they just didn't like the non-stop testing, the huge classes, and all the rest of it, and they were miserable. And I saw what happens as a teacher when you have kids that aren't a good fit for the environment: they fail tests and get depressed. So unless you're willing to completely remake the curriculums of these schools (in which case you'd probably be better off just closing them and starting over), you should keep the test.

What's to be done, then? The simplest solution may be to re-institute the system of free weekend test prep targeted at neighborhoods that historically send few kids to the Specialized schools, as well as reinstitute the Discovery program, which was a summer program that allowed minority kids who missed the Stuyvesant or Bronx Science cut-offs on the test to get in after a period of preparation. These small fixes have the benefit of being politically feasible, unlike the elimination of the test, which is a far too radical reform to ever pass in a politically centrist (or conservative) environment like Albany.

N.B.: Tom Allon, the publisher of City & State and a 1980 Stuy alum, also suggests adding a writing component to the exam and changing the exam from year-to-year to decrease the value of test-prep. I agree with the second suggestion, but not the first, because I think it would bias the test against recent immigrants.

#ask a native new yorker
#stuy
#stuyvesant high school
#original
Do you know the scoop? Comment below or Send us a Tip