Ask A Native New Yorker: Should I Rent Or Buy?

This week's question is timeless: Rent or Buy?

My question has to do with the crazy real estate market in NYC, which is so different from the rest of the country.

My husband and I have lived in Brooklyn for about a year, and much to the surprise of our friends and family, we really love it and plan to stick around for awhile. Right now we are renting in Park Slope but have started the long and somewhat painful process of looking for a place to buy.

Everyone keeps telling us about the low inventory and are preparing us to beg money from family, borrow from retirement, and otherwise completely drain ourselves financially to make it happen. They make it seem like everyone has to do this when they're starting out.

Is it really perfectly normal to have to kill yourself to buy your first NYC apartment?

[Editor's note: Jake is away this week, so we selected this timely yet timeless response from the vault. Enjoy!]

There are many words I'd use to describe the current New York real estate market, but normal isn't one of them. How about depraved? Exploitive? Irrational? Horrifying? Sickening? Fucked up beyond all recognition?

But not normal. Not normal in comparison to other cities in America, not normal in comparison to New York's own historical market trends, not normal in its social and spiritual effects on its participants. As a recent arrival, you may think you feel this more acutely than those of us who have lived here our whole lives. Quite the contrary. Imagine being forced to have the same conversation about apartments and mortgages and buying vs. renting over and over, for years, for decades. That's the kind of thing that could drive even a well-adjusted native New Yorker insane. 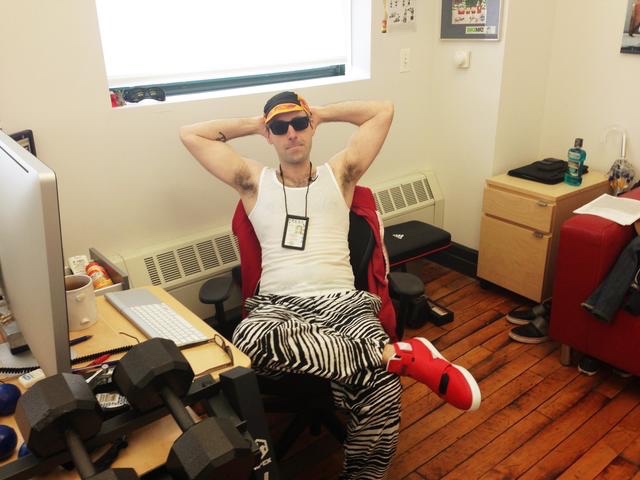 Jake Dobkin will be back next week. (Courtesy Jake Dobkin Private Collection)

Back in the '70s my parents moved to Park Slope—they'd been living in a macrobiotic socialist commune in Boerum Hill, but decided to get their own place once they got pregnant with twins. After renting for a year, they bought a brownstone with another family. At the time, my mom was a nurse and my dad was a lawyer at Legal Services, and two floors of a house cost them about twice their annual salary. This wasn't unusual back then, as the most common job in the neighborhood was probably being a school teacher. Sure, it lacked some amenities, but even back then our neighborhood had a couple of good pizza places, a few supermarkets, and a decent school.

Today a house on my parents' old block goes for three or four million dollars. A duplex goes for about $1.5MM, which is 15 times the annual median household income for the neighborhood. Suffice it to say, there aren't that many young teachers or nurses or attorneys representing indigent clients buying on the block. It's mostly finance guys now—even the doctors and corporate lawyers are getting priced out.

And it's not just Park Slope: On average the whole city is about 70% more expensive to buy in than it was in 2000, and at least 400% more expensive than it was in 1980 (on a real dollar basis). So the crushing sense of hopelessness you feel when you look at real estate listings really is a phenomenon of our generation: our parents and grandparents never experienced anything like it. 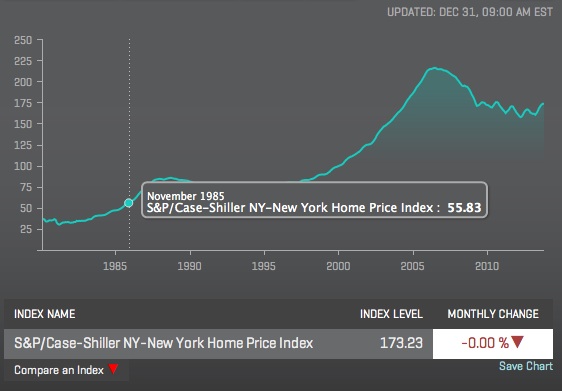 Of course, they couldn't order Chinese food over the internet in the '70s. Maybe New York is really seven times better than it was when I was growing up. Or maybe globalization has led to massive numbers of foreign kleptocrats trying to hide their money in NYC real estate, artificially propping up the value. Or maybe there's been a massive cultural change in America, whereby suburbs have finally been discovered to be totally stifling and uncool, and now everyone wants to move to Brooklyn, and so prices have naturally gone up. I can see the truth in some of that.

But even the most bullish real estate investor must admit that a big reason housing is so expensive is that we are still in a real estate bubble, caused by speculation and low interest rates, which in turn are caused by economic stagnation, caused by a generation of deregulation, caused by the rich and their Republican lackeys who stole all the money.

Unfortunately, just because we're living in a real estate bubble doesn't mean it's going to pop any time soon. It could keep inflating for years, before people who bought Bed-Stuy houses for $2MM stop being able to make their payments and the whole thing collapses like it did in Tokyo in the '80s. Or maybe prices just go up a little bit, or stay flat, and inflation slowly brings real costs back down to a more reasonable place.

All I can tell you is that I'm 37 now, and I still rent. So do most of my native New York friends. For me, it was always an easy decision. When I was younger I never had the money to buy a place, and now that I do, I don't see any places that seem worth buying. Who wants to be the sucker that pays some schmuck $1MM for an apartment that guy bought for $300K seven years ago?

But this is about you. Here's some advice: Don't buy before you need to. The point of your 20s is to experience a variety of different situations and neighborhoods. Renting is good for that. When you hit your 30s, and want to put down roots, only buy if you can afford it. The banks these days will help with this, since they probably won't write you a loan unless you've got a 20% down payment. If you do buy, don't spend spend more than 35% of your gross income on monthly payments, and value proximity to transportation, work, and good public schools over apartment size and amenities. Overpriced locations like Park Slope are not going to be a good option for most working people—explore up-and-coming neighborhoods in Queens and the Bronx. Think about solutions like bunk-beds for the kids and pressure walls to do more with less space. By refusing to overpay, you will avoid participating in the further inflation of the housing bubble, which is a public service, and your future un-bankrupted self will thank you.

And if you don't buy, don't beat yourself up. The majority of New Yorkers rent, and I've found that if you invest the money you would have used for a downpayment, along with the money you save living in a small rental, into a diversified market portfolio, you can achieve pretty good returns with much more flexibility than if you'd taken all of it and invested it in a single, highly illiquid real estate asset. Rent-stabilized apartments are particularly helpful for building up savings.

This can give you the freedom to take a more creative job, to travel, or just to generally feel less stressed about making your monthly payments. Remember: Most of the media you are exposed to is trying to convince you that owning is some critical part of the American dream- despite its many obvious drawbacks (property taxes, upkeep costs, higher monthly payments, etc). That's because the current power structure in our society depends on housing prices always going up. Don't uncritically buy into that thinking.

Consider that ever-increasing housing prices are bad for New York City. Think about all those neighborhoods in inner-London, emptied of the working and middle class, with the silent streets and closed up shops, because the foreign owners who parked their money there only visit twice a year. Think about what would happen if no working families, or young people, or creative artists, could find anywhere to live reasonably close to where they work or perform. And then support progressive politicians who will do something about this problem, by building more affordable housing, supporting higher property taxes on luxury apartments, and instituting policies like flip taxes that discourage speculation.

New York will probably never again be a cheap place to live, but policies like these can make things a little bit better, and until we come up with better ideas, they're the best shot we have for making this city the kind of diverse, interesting place we all want to live in.

NB.: If you're seriously considering the rent vs. buy question, play around with the Times' Rent vs. Buy calculator- it's really interesting to see how all the assumptions change the ROI.

Ask A Native New Yorker anything via email. Anonymity is assured.