Ask A Native New Yorker: Should I Rat Out My Horrible Roommate?

Are you relatively new to this bustling metropolis? Don't be shy about it, everyone was new to New York once upon a time... except, of course, those battle-hardened residents who've lived here their whole lives and Know It All. One of these lifers works among us at Gothamist—publisher Jake Dobkin grew up in Park Slope and currently resides in Brooklyn Heights. He is now fielding questions—ask him anything by sending an email here, but be advised that Dobkin is "not sure you guys will be able to handle my realness." We can keep you anonymous if you prefer; just let us know what neighborhood you live in.

This week's question comes from a New Yorker who's getting rid of a bad roommate.

I'm nearing the end of my lease and will not be renewing with my current roommate.

In theory, he seems like a great roommate: he's got a steady well-paying job, he's polite and sociable, loves to cook, active in the community and works long hours.

In practice, he's terrible with his money (he's been late on rent twice in a year, but always has new clothes), he's disgustingly messy, loud at all hours, constantly has friends from out of town using the couch as a hotel and is overall just inconsiderate.

As we go our separate ways, he's been talking about moving in with some mutual friends. Should I warn his potential roommates about his less than desirable nature?

You should definitely rat his ass out. New Yorkers are famous not just for our brutal honesty, but also for our proud tradition of "street justice," in which we take ethical matters into our own hands and mete out terrible retribution on those who have wronged us. That's why they set Death Wish and Taxi Driver here. That's why Bernie Goetz got off. One thing New Yorkers never want to be is a chump: it sounds like this roommate rolled you good—don't you want to get even for that? 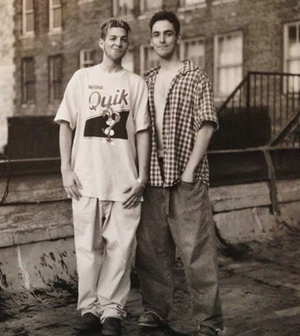 A young Jake Dobkin shares a moment with one of his old roommates moments before pushing him off a Park Slope roof. (Courtesy private Jake Dobkin Collection)

But say you're one of those hippie "live and let live" Park Slope types who believes that revenge is un-zen. Remember: the karmic wheel does not always spin on its own. If you don't start talking, there's a very good chance this guy will be moving in with your friends, and will soon be soiling their kitchen sink with his unwashed dishes and their couch with his unwashed friends. Think of them! Their future residential happiness is in your hands. Or again, think of yourself—they're going to hold your ass responsible when the shit hits the fan.

You may be put off by the urge not to be a tattletale. This notion is misguided! Sure, it's always better to handle things yourself, mano-a-mano, if you can. But we live in the real world; if you go tell this guy he needs to be honest with your friends about his "habits," he's just going to get mad at you and then lie to them, and that won't help anyone.

Or maybe you've seen one too many of those "Stop Snitchin'" rap videos the kids are always talking about (in 2004!). That was either a very cynical attempt by local criminals to protect their gang franchises, or a genuine but misguided attempt to protect innocent people from the corrupt "justice" of some inner-city police departments. That's not the kind of ratting we're talking about here. No corrupt, racist authorities or potential jail time is involved. There is zero moral argument against honesty here.

But even if there was, and you believed ratting this guy out was morally suspect, this is not the time for those concerns. As Saul Alinksy wrote in Rules for Radicals, "One's concern with the ethics of means and ends varies inversely with one's personal interest in the issue, and one's distance from the scene of conflict." When your friends are contemplating moving in with the kind of cold-blooded psycho who is "disgustingly messy," do you really have the luxury of ethical dilly-dallying?

So just tell the truth. Hey, maybe it won't matter—your friends might like to party and enjoy the excitement of frequent out of town guests, and could welcome this guy into their home!

N.B.: Now let's all take a moment to listen to the classic 1992 reggae track "Informer" by Snow, guest-starring MC Shan. "A licky boom-boom down", indeed.

N.B. 2: For readers seeking additional roommate advice, here's a native New Yorker addressing such questions as How Old Is Too Old To Have Roommates?, What Should I Do About My Roommate's Tinder Sex Addiction?, and Is It Wrong To Charge My Roommate More Than Half Our Rent?

#ask a native new yorker
#roommates
#original
Do you know the scoop? Comment below or Send us a Tip