Ask a Native New Yorker: Should I Narc Out My Illegal Neighbors?

This week's question comes from someone who wonders about some illegally converted apartments.

We live in one of those very Queens-like blocks where all the houses are attached and are single family. Before we bought our house we realized that everyone on the block had illegal apartments in their house (mostly in the basement) but it didn't bother us—heck most of Queens is illegal apartments.

But recently there was that one house that blew up (at least partially) because of an illegal apartment and kitchen and now I can't get it out of my mind. What if one of the apartments in these cellars goes kaboom and burns down the whole block? I have my family to think of. Even if we did get out okay, we would have a better chance than those families in the basements with only one door out and no ventilation.

There is no way to make these apartments legal or safe (they are officially cellars) so I could report them but I would also feel terrible. I know the homeowners are just making ends meet and the tenants are getting affordable rents (I would at least imagine). I don't want to mess up their good thing and report them, but would I blame myself if anything happened to my family?

Or am I just a horrible gentrifier who ruins it for everyone and am letting my imagination run away with me?

I have to be honest, the first time I read your letter I felt this surge of native rage. Like who the fuck made you Fire Commissioner, man? You want to get all these poor people thrown out on the street, or worse, turned over to La Migra and booted out of the country?

But then I calmed down and re-read it a couple of times, and after meditating on it, I've come to believe that you're coming at this from a place of genuine human concern for your neighbors and family, and not a desire to report your neighbors on the flimsy pretext of fire concerns in a selfish desire to gentrify your block and drive up property values.

I still wouldn't call in the law, though. As we discussed last week, the two factors you must consider here are whether the danger is truly immediate, and whether the (potential) victims can take care of themselves. Unless you smell gas, the danger here isn't immediate. These houses have probably been standing for 100 years, with people living in the basements for most of that time. Stop freaking—you probably won't be burned to death tonight.

[This is just an opinion! If you've noticed conditions that do seem imminently perilous to human life, for instance a subdivided basement with ten families living in it, or someone storing canisters of propane, by all means dial 9-1-1. I'm assuming a situation closer to "one family living in a single basement apartment not currently zoned for residential occupancy."] 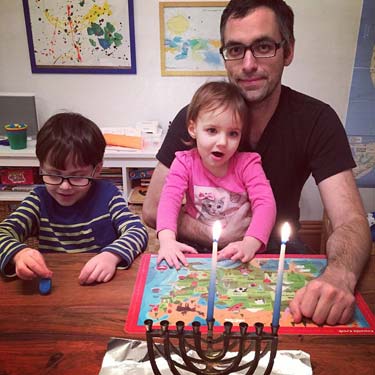 Your neighbors can decide for themselves if the risk of living in these basements is worth taking. Given the current affordable housing emergency, they might genuinely be better off facing the small risk of a fire, rather than the large risk of not being able to find another apartment and becoming homeless, especially if they are undocumented immigrants who will not qualify for much public aid.

Your job here is to protect your house and your family. Take some of your gentrification dollars and buy some fire alarms, a sprinkler system, and a couple of those ladders that let you climb out the window.

Remember, though: you bought this place knowing how the houses were attached, and that people were living in those basements. This is a risk you accepted—nobody put a gun to your head. If a few months of living in perpetual fear of explosion has changed your mind, the decent thing to do is to sell the house (most likely at a profit, given this idiotic market,) and find a new place to live. Don't turn your neighbors in because you turned out to be too much of a coward to live in Queens!

There are many, many, many illegal apartments in New York—more than 114,000 units, according to the New York Times. That's something like 5% of our city's housing stock. Evicting everybody who lives in a basement, factory, or backyard tent is simply impossible: with a 2% vacancy rate, we don't have anywhere else for them to live.

So our only alternative is to try to make them as safe as we can—and the best way to do that is through a legalization process that identifies these illegal apartments, extends loans to the landlords to fix the most egregious safety concerns, and then regulates them in a sensible way—for instance, with inspections from the FDNY to make sure they're not about to explode. This is part of De Blasio's housing plan, although very little seems to have been done so far:

There are thousands of unsanctioned housing units across the city, primarily in basements and above garages. The conditions of these units may represent a threat to health and safety of their occupants and to the first responders who may be called to respond to emergencies in those units. The engineering and fire safety challenges created by these units are extremely complex. The City will work with the relevant stakeholders to examine how best to bring these units into the regulated housing system, including a review of other cities’ best practices to bring fresh ideas to the discussion.

If you don't want to sell your place, consider getting to know some of your neighbors! Form a block association—you'd be surprised how much common ground you might find with the people who live around you. For instance, they may also want to avoid being incinerated! You could print out some safety tips about candles, bad wiring and overloaded power strips, and even hand out smoke alarms and fire extinguishers. It'll cost some money, but you'll sleep easier.

Keep calm and carry on!

#ask a native new yorker
#fire safety
#illegal apartments
Do you know the scoop? Comment below or Send us a Tip