Ask A Native New Yorker: Should I Let Strangers Into My Building?

This week's question comes from an apartment dweller wondering about The Code.

I live in an apartment building with two entrances that both require a key. Sometimes, when I get home, I see somebody loitering outside, likely waiting for a friend. What irks me is how they will squeeze their way in without a word, then silently wait for me to open the second door.

I guess my question here is, is it ever right for a person visiting an apartment building to expect a tenant to let them in?

I sometimes wish I could tell them that I'd rather they waited outside, but it seems rude, and having been the recipient of such behavior in the past, it's a bit off-putting. So, what is the right protocol in these situations?

No, you should never let a stranger into your building. If you don't feel safe confronting the tailgater and asking them who they are and where they're going, you should just make use of the other entrance to the building, or wait until they leave. 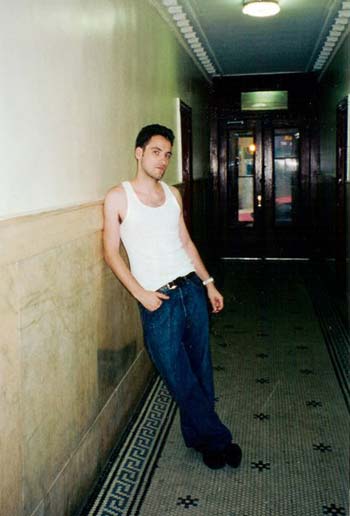 Would you let this guy in? (Courtesy Jake Dobkin Private Collection)

Some people don't have a consistent policy about this, and make up their mind based on who is waiting at the door. So pop quiz—which of these people would you let follow you in?

a) Girl scout, with box of cookies for sale
b) UPS guy in full uniform
c) Mother with stroller and baby
d) Young, thuggish looking guy with the shifty look of an obvious crack addict with a need for fast cash

Trick question! They're all there to rob you! This isn't Ohio, where a stranger is just a friend you haven't met. This is the New York City, where a stranger is a serial rapist until proven otherwise. If you want to survive here, you need to develop a healthy paranoia, and apply it dispassionately in all situations.

Besides keeping you safe from grifters in girl scout costumes and women pushing the baby carriages with fake or stolen babies, locking out everyone will prevent you from acting on any unconscious biases, and potentially discriminating against people based on the color of their skin or the clothes they are wearing.

Relax—I'm not saying you're a racist—I'm just saying that if you don't have a hard-and-fast door policy that you apply to everyone, you might accidentally fall victim to some subtle unconscious bias, and accidentally act racist, and that ain't right.

A subtlety that many people don't consider: At times, you may be the stranger locked out of your apartment, or waiting for a friend. You'd be a hypocrite in this situation if you tailgated someone else. I take this very seriously—when I used to live downtown in an old tenement on Thompson Street, I'd pause a minute to let the old ladies get into the building and then use my own key, just to avoid scaring them. That's real Buddhist compassion and thoughtfulness right there.

Of course, a more sane technique might be to introduce yourself to your neighbors in the halls, so if you ever encounter them at the door, there's no awkwardness. But then you'd have to talk to people, and is it really worth the effort?

In conclusion, stay alert—don't get hurt.

N.B. There's a Seinfeld episode, The Strongbox, that deals with this situation really well- it begins with Jerry locking out a neighbor he doesn't recognize, and ends with him digging up the neighbor's parrot from a pet cemetery.

N.B. Here are some less sarcastic safety tips from the NYPD.

#apartment code
#ask a native new yorker
#stranger
#stranger danger
#tailgating
Do you know the scoop? Comment below or Send us a Tip