Ask A Native New Yorker: Should I Give Money to Homeless People?

This week's question from a NYC resident who still has compassion for the less fortunate.

Should I give money to homeless people, beggars, and anyone who asks for it in the subway?

Somehow, I just can't pass a disabled man with his hand out on the street without feeling incredibly guilty. And when I hear, "excuse me ladies and gentleman" on the subway, dread fills me because I know I will be moved by the sad story I am about to hear.

I often give people money, but of course I am aware of the conventional wisdom that all I am doing is donating to an alcohol and drug fund.

My first question is, should I give these people money? My second question is, how do the masses of native New Yorkers who just walk by deal with their guilt?

You are a very good person! It is an admirable human quality to be moved by suffering and to react to it, even when you know that some of the money you give will be squandered. Even the hardest hearted Native New Yorker occasionally gives money to beggars, especially at this time of year, so the question is not "should I give money to the homeless", but "which homeless people should I give money to", and "what is the most effective way to help the destitute?" Let's try to answer these questions today.

Like any other category of New Yorkers, the homeless are not a monolithic group. According to the Coalition for the Homeless, of the fifty-two thousand people in the New York shelter system, about forty-one thousand are members of homeless families (split about evenly between adults and children). The remaining eleven thousand are single adults (of whom 75% are men.) Then there are the "unsheltered homeless," who are not included in the previous totals, and who number at least a few thousand more. Homelessness in New York has exploded over the last 5 years of economic crisis: up about 50% since September 2008 [pdf].

Even conservatives, who don't believe in helping the poor because it "lulls able-bodied people into lives of complacency and dependency" can probably find a few shreds of sympathy for homeless children. Especially when they learn that 28% of homeless families have at least one adult who has a job. The reason most of these families have become homeless is because of a recent employment crisis, like losing a job, or a housing crisis, like getting evicted from an apartment because of rising rents or a family dispute, and once this crisis passes, most of these families will find their way back to stable housing. We are lucky to live in a state that guarantees shelter to its residents, so the question here is how can we best improve the shelter system we have, to get these families into stable housing faster? 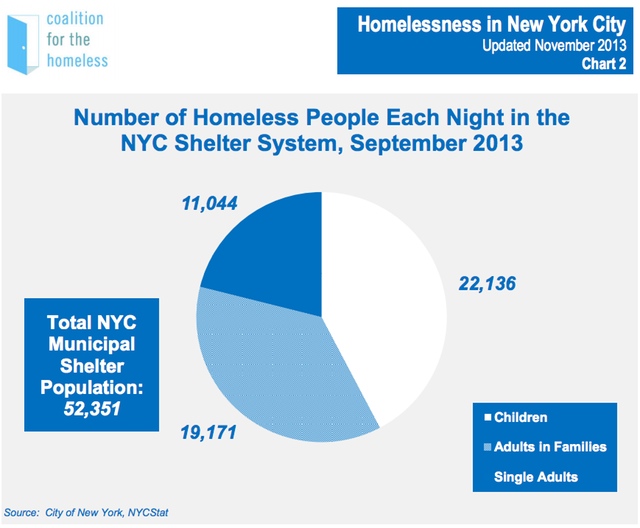 Just last month, Ian Frazier wrote a great article in the New Yorker about this topic. It's worth the half-hour it will take you to read it, but if you don't have time, it makes a convincing argument that we should pivot away from the Bloomberg Administration's homeless policy, which seems to involve shuttling homeless families around the city on an exhausting hunt for shelter, to providing more stable, longer-term housing for each of these 12,000+ families until they get back on their feet. This would involve giving them priority access to NYCHA housing, making it easier for them to qualify for temporary rent subsidies, and generally allowing them to qualify for benefits without having to frequently report to inconvenient locations to re-qualify.

The current administration has opposed these ideas because they feel that they'd create a "moral hazard": that people would fake homelessness to jump the waiting list for cheap housing. That argument seems unconvincing, but even if a few cheaters used homeless policy to get benefits they don't deserve, this seems like a worthwhile price to pay for getting blameless children into stable housing faster than they do now.

The easiest way for you to support these policy changes is to give money to the Coalition for the Homeless, which has been nudging and suing the city to move towards these policies for many years. Consider monthly giving, which is a helpful way to make sure you don't forget to give, and to give them a more stable financial base from which to fight on behalf of the homeless. You can also write to the incoming administration to let them know that you feel reducing homelessness is a priority, and give money to progressive candidates at the state and federal level, because many programs that help homeless families (and families at risk for homelessness) are funded and controlled by those parts of government. 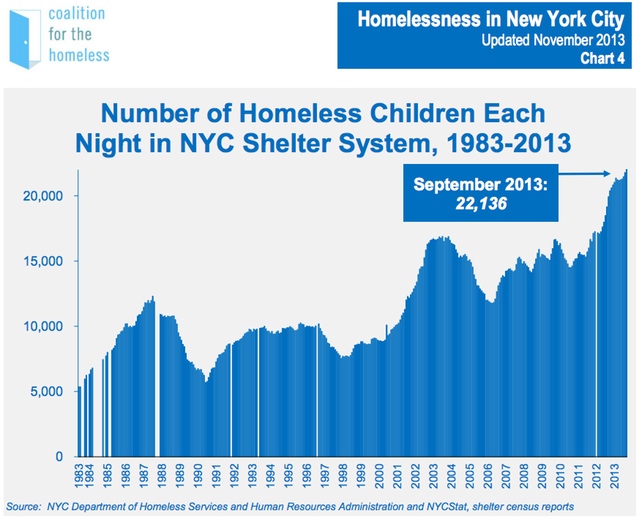 We must also take a minute to think about why there are so many more homeless families on the streets than there were five years ago. The main answer is that working class wages have stagnated while the price of housing, even in poor neighborhoods, has continued to rocket ever-upwards. The obvious solution to the salary side of the problem would be increasing the minimum wage well past the $9 it's currently scheduled to rise to in 2016. The current obstacle to this is Governor Cuomo, who appears to be pivoting to the center-right in order to increase his chances for presidential office in the future, and the state legislature, which is still corrupt, gridlocked, and partially controlled by conservatives upstate and in the suburbs. Continue to vote liberally until this changes.

We have discussed affordable housing before, and will again in the future, but the current best bet for making more affordable housing available seems to be upzoning most of the city for taller buildings, while requiring developers to include more affordable units in exchange for building higher. And some of these units should be set aside for formerly homeless families. Bill de Blasio seems to support some of these policies, but even with his help it will be years before we see any new affordable apartments coming to market. 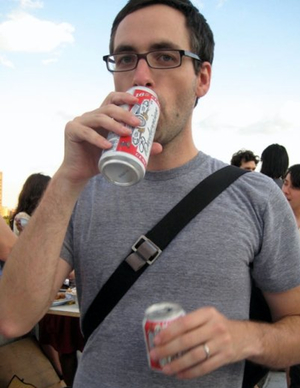 Homeless families aren't generally the people you see begging on the street or subways: they're too busy shuttling back and forth to the Department of Homeless Services PATH center, getting their kids to school, and commuting to their poorly-paid jobs. The beggars are more likely part of the single-adult homeless population, and often from the most difficult-to-help section of it: the chronic unsheltered homeless.

These men (the majority are men) often have mental health issues and problems with alcohol and drugs. That doesn't mean you should never give them money: even an alcoholic drug addict can benefit from a sandwich or a dollar towards a Bowery bed on a cold night. But native New Yorkers resist giving to every beggar: we try to pick the ones who seem the most genuinely in need of help. This means avoiding the guys who always work the same spots and train lines. For them, the best help is to give money to food banks and soup kitchens.

I like City Harvest (again, consider a monthly donation), but there are many good programs around New York. Also worth checking out is Pathways to Housing, an interesting program that focuses on getting the chronically homeless into housing quickly, and then getting them the support programs they need to stay off the streets. [Malcolm Gladwell wrote about a similar program in Denver in 2006.]

So, yes, do give to the homeless! Give money directly when you are moved to do so by people who seem least likely to spend it on drugs, give money monthly to homeless charities, and support politicians at each election who are committed to looking out for the poor. In doing this, you will find that your generosity is paid back many times over by feelings of increased self-esteem. This is the good karma that the universe gives you for doing the right thing!

N.B.: It's also worth discussing why the vast majority of the homeless in NYC are black or Latino. We are still very far from a "post-racial" society where your skin color or accent is not connected to your social class.

N.B. 2: Housing Works is a good charity that supports poor and homeless people with HIV and AIDS. Give them money, and also consider donating your books to their bookstore, and your stuff to their thrift shops.

#ask a native new yorker
#homeless
#homelessness
#original
Do you know the scoop? Comment below or Send us a Tip