Ask a Native New Yorker: Should I Donate My MetroCard Swipes To The Poor?

Are you relatively new to this bustling metropolis? Don't be shy about it, everyone was new to New York once upon a time... except, of course, those battle-hardened residents who've lived here their whole lives and Know It All. One of these lifers works among us at Gothamist—publisher Jake Dobkin grew up in Park Slope and still resides there. He is now fielding questions—ask him anything by sending an email here, but be advised that Dobkin is "not sure you guys will be able to handle my realness." We can keep you anonymous if you prefer; just let us know what neighborhood you live in.

This week's question comes from transplant who wonders if it's okay to swipe needy strangers into the subway as he exits.

Hey NNY,
I've lived in NYC for about 4.5 years, and I consider myself a pretty nice and charitable fellow. I have a few charities I give to annually, and only occasionally give money to the homeless on the train or on the street. But I'm writing today about a different type of charity.

I only buy monthly MTA passes, a choice that seems to be plastered across my forehead, because it's just about impossible for me to exit the turnstiles without finding at least one or two people waiting, patiently, to ask if I can swipe them in for a ride. I've done it once, but I've always wondered about the legality of doing this (I presume it's totally illegal) and the wisdom of doing it mere feet from the agents inside the glass cages.

What do you think, Native New Yorker?

Thanks,
Do the Swipe Thing

Congratulations on having such an open and generous appearance! This is rare in anyone who has lived in New York for more than a few months. After that, most people pick up that "don't fucking touch me" vibe, and it shows in their face. Vigilantly guard this noble quality, as helping people is a wonderful thing, and our native gruffness means most New Yorkers get all too few opportunities to do it. 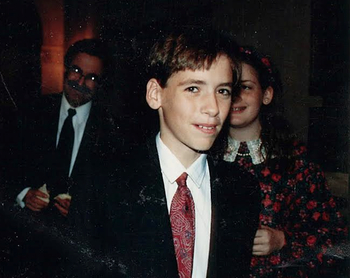 I speak from experience here! I have one of those friendly, non-threatening, slightly dazed looks that seems to attract questions from strangers. Giving directions is a particular specialty. At least twice a day, I am stopped by a lost tourist asking for directions to the Brooklyn Bridge, The Promenade, or Brooklyn Bridge Park. I know in my heart that I'm going to get into heaven just based on helping so many of these lost Germans. Perhaps they'll even build a statue of me back in Stuttgart‚ perhaps entitled "The Helpful Jew." But enough about me! I believe you were asking about giving away subway swipes?

Your instinct to donate monthly MetroCard swipes is admirable, but misplaced. I can understand where you're coming from: seeing a poor person standing outside the turnstile, often a kid, just trying to cage the money to get to work or get home—you'd have to be a monster not to feel an urge to help. Especially when it's no skin off your back: you're leaving the turnstile, and the 18 minute mandatory lockout isn't going to hurt you. Unfortunately, this is an inefficient form of charity, and if everyone adopted it, it would drain serious revenue from the MTA, and force them to end the current unlimited discount system. This would mean higher fares for everyone, particularly the working poor, who can least afford it.

However, donating swipes is not illegal, or even against the stated rules (you can't sell swipes, though—that's still some form of crime, although, interestingly, not larceny.) So if the person outside the gates seems truly needy, and does not appear to be using you to gain entry to the system to mug or murder anyone, and you don't do this too frequently, I say bombs away. You may want to consider printing out this post to show to the MTA Police officer who you may be spending some time with after your charitable act!

But think bigger! The reason those poor people are huddled outside the turnstiles is that the minimum wage in New York is still immorally low ($8.00 right now, rising to $9.00 in 18 months.) Mass transit fares have been rising faster than wages. This means that transportation is taking a bigger bite out of people's paychecks, to the point that some of the working poor literally have to beg to get to work. How fucked up is that?

If you really want to help the people begging you for a swipe, you should support politicians who believe in increased funding for public transportation, and give to the not-for-profits that help the working poor and homeless make ends meet. We discussed a bunch of them in our recent post on giving cash to the homeless.

It's also worth mentioning that the MTA MetroCard discount scheme is in itself discriminatory against the poor, simply because it offers the largest discounts for monthly passes. Many of our fellow citizens can't afford the current $112 up-front outlay, which leaves them paying per swipe. That's a classic regressive tax on the poor. The MTA should adopt a program that lets people buy monthly passes through smaller weekly payments. Or the MTA could adopt a discount scheme for the working poor, the same way they do for seniors. Write in and suggest that stuff to them!

To conclude: helping people is a very good thing that is sure to pay you back karmically, as well as in an enhanced sense of self-esteem. We New Yorkers should all recommit ourselves to this purpose‚ not just in the little things, like giving a buck or a swipe to a homeless guy, but in the big things, like voting for and giving our energy and money to social programs that produce genuine change for the poor and oppressed. Take the A train to the barricades, comrades (just not tonight because parts are out of service for FastTrack repairs)!

N.B.: Our mass transit system also oppresses the poor by not serving the outlying impoverished neighborhoods that well—that's why we need more SBS service and the TriboroX line. On the other hand, the single fare regardless of distance (unlike other Metro systems, like SF, London, and DC, which charge by zone), is a progressive innovation that New Yorkers should be proud of; it genuinely helps a lot of poor people.