Ask A Native New Yorker: Is It Wrong To Walk & Play With Your Phone?

This week's question comes from a New Yorker who thinks pedestrians need to snap out of it.

You guys are always lecturing car drivers about how dangerous their behavior is and how they endanger pedestrians. I get that cars are dangerous, but I feel pedestrians deserve some of the blame too. I'd say 90% of the people walking by my office in Midtown are on their phones—some are just listening to music, but plenty are playing video games or having animated conversations with their friends.

This is not a low-traffic street: at both corners huge trucks are turning all the time, the streets are sometimes so crowded you have to be careful not to knock right into people, and it seems like half the sidewalk is often shut down for construction or scaffolding. If one of these cellphone idiots gets crushed by a cement truck because they're too busy playing Candy Crush to notice, isn't that kind of their fault? Shouldn't people focus on walking?

If a cement truck driver kills anyone, be it a pedestrian or a cyclist or a guy on a pogo stick, it's the truck driver's fault. This may not be true legally—say if the pogo stick guy is hopping against the light—but it is true morally, because cement trucks weigh a lot more than bikes or people, and with great weight comes great responsibility. Yes, this means the truck driver will have to endure many indignities, such as waiting patiently as people cross even after the light has changed, but practicing patience is a wonderful opportunity to become wise, which many cement truck drivers might really appreciate later in life.

Do pedestrians bear any culpability for their poor choices? Of course—I teach my kids to cross at the corner, look both ways, pay attention to cars, and never assume anyone sees them in the intersection. These are common sense rules passed on by one generation of NYC parents to their kids from time immemorial, although I bet back when all the traffic was horse-drawn, there were probably fewer fatal accidents, because horses move slower than cars, and are probably smart enough to slow down if they see someone in front of them. But I digress—while motorists deserve special scrutiny from the law (which is why you're required to get a license to drive, but not to walk), that's not going to be much consolation to you if you get yourself smushed because you were too absorbed with your phone.

Cyclists have the one-earbud rule: you're legally allowed to bike in New York with one earbud in, as long as the music isn't too loud. Some people feel that even this is unsafe, but I find that I can listen to an audio-book or music at a low volume, and safely cycle, taking in all the necessary information from my environment. Of course, I bike the same few routes most days, and when I bike into the Manhattan or on some new streets in Brooklyn, I remove the earbud and give the street my full attention.

Pedestrians move slower than bicyclists, but the research still shows that active-playing with your phone is dangerous, not just because of the button pressing, but because of the "cognitive load" of the task. That's why I think you're best off just listening to music or something that doesn't require a lot of attention. Sending passive-aggressive work emails while you walk, or having deep conversations about emotionally fraught topics like where to order dinner—that's the kind of thing that's going to end up with you walking into a pole.

(Even if you don't give a damn about yourself, think of the poor bastards just trying to get to the subway, trapped behind you as you tap-tap-tap-away. Why can't you step to the side, in the leeward side of a stoop or sign, out of the flow of traffic? I guarantee that you will save time and get to your destination faster if you separate the tasks of typing and walking, rather than trying to complete them both at once- and you won't bear the harsh karma of slowing down countless strangers.) 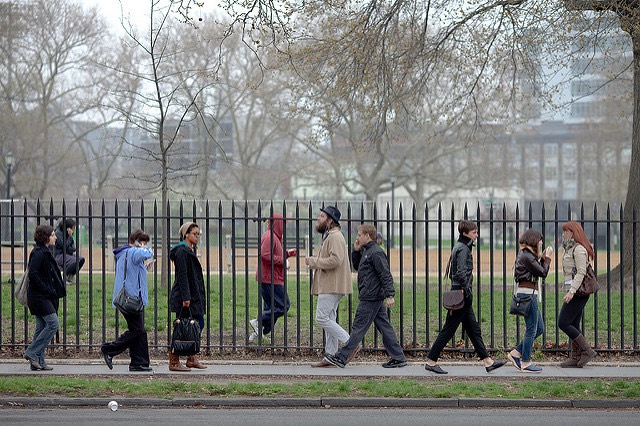 As with my biking, the location matters, too; there are parts of the city that have almost no pedestrian traffic on the sidewalks and relatively low volumes of cars, so you've got more room for error in those neighborhoods. But midtown? Come on, that's like the Olympics of urban walking. You've got harried business people running to grab lunch, lost tourists stopping every 10 steps to look up and admire the buildings, and delivery guys throwing boxes off trucks directly across the sidewalk in front of people. Not giving those streets your full attention is just a recipe for self-harm.

This will be less of a problem in the future. Just as robot cars and trucks are going to reduce fatalities on the roads, our phones are quickly developing capabilities to stay in our pockets for most tasks. You can already ask Siri for directions, send text messages to friends, ask her to play a specific album—these are all things that used to take a bunch of clicking around. Maybe in five years it'll be weird to see people on the street touching their screens, like Luddites clinging to flip-phones today.

Were the streets safer before cellphones? Yes, of course; for thirty years, deaths from auto-crashes were dropping precipitously, until 2007 or so when everyone began to get smartphones. The numbers actually increased 10% nationwide so far this year over last year. I see a similar pattern for NYC traffic deaths: big declines up to 2007, and then uneven progress since then. I can't think of another factor, besides the widespread introduction of smartphones, that could explain that; if anything, our streets have been made safer by DOT bike lane and traffic calming programs, and it's surprising that the numbers of deaths haven't continued to drop.

So what's the answer? Should we try to pass a law criminalizing walking and texting, like our neighbors in New Jersey have been trying to do? That seems like it would lead to an enormous amount of extra police work, and the usual harassment that goes along with dragnet laws: the guy in the expensive suit is allowed to tap away, but the black teenagers coming home from school all get spread against the wall and issued texting tickets. No, I think we've got to solve this through education: the tourist books should all contain a warning against stupid smartphone behavior, and we NYC natives should add a new rule when we teach our kids how to get around—"that phone better stay in your pocket!"

Or maybe, I don't know, better signage? I think one saying "20 People In New York Were Killed Crossing Streets While Using Their Phones Last Year" on every block in Midtown would probably cut down the worst behavior real quick.

N.B.: John asked me if I thought the streets were more dangerous when I was growing up compared to now. Of course they were—if you include getting stabbed with rusty syringes or attacked by squeegee men. But the city was even more car-centric back then—motor vehicles were heavier, with fewer safety features like anti-lock brakes, and streets were not designed to protect pedestrians, with fewer street lights and walk signs. Groups like Transportation Alternatives have done tremendous work influencing elected officials to plan "complete streets" that don't solely favor motorists, and while there's still a lot more to be done, NYC is at least headed in the right direction toward Vision Zero.

#ask a native new yorker
#cell phones
#distracted walking
#distractions
#original
Do you know the scoop? Comment below or Send us a Tip